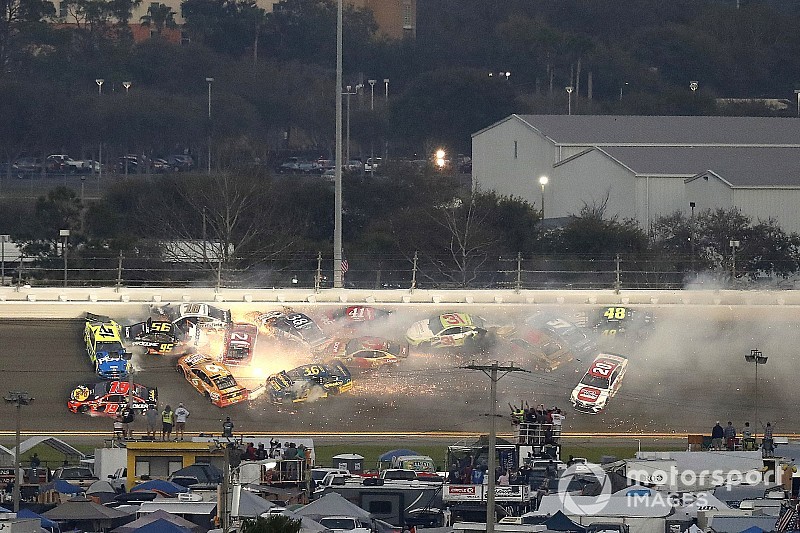 An awe-inspiring outing by Matt DiBenedetto in the Daytona 500 turned from exciting to heartbreaking in just a single lap.

In Sunday’s season-opening Daytona 500, DiBenedetto led a race-high 49 laps but was collected in a multi-car incident with 10 laps to go in regulation, bringing an abrupt end to one of the best races in his Monster Energy NASCAR Cup Series career.

“This was the most amazing and most heartbreaking day all in the same day,” DiBenedetto said. “Unbelievable how fast my car was. It’s heartbreaking, but it was really neat to lead that many laps, have that many good things go.

“I am so appreciative of all my fans. I have had so much support it is overwhelming.”

The incident, which involved 21 cars, was sparked when Paul Menard spun around DiBenedetto’s No. 95 Toyota in Turn 3, sending the 27-year-old driver into a myriad of other cars.

“It was just a racing deal. Nothing intentional,” DiBenedetto said. “I have a great relationship with Paul. I think he was trying to sneak into my outside but wasn't quite there. When he bumped me, he clipped my right-rear and turned me into the wall.

“It was just racing.”

After two years with GoFas Racing, DiBenedetto announced last season that he would be moving in a different direction in 2019.

Just over a month after his announcement, Leavine Family Racing introduced DiBenedetto as the team’s newest driver of the No. 95 car, which was previously driven by Kasey Kahne and Regan Smith last season. The organization also announced additional support from Toyota and a technical alliance with Joe Gibbs Racing.

“I’m used to different situations where we’ve been with small, underfunded teams, and we made the most of what we had,” DiBenedetto said. “But this – I had one hell of a piece of equipment under me.”

In his first race with LFR, DiBenedetto finished 28th.

Despite being involved in the wreck, DiBenedetto still found light at the end of the tunnel.

“There’s still a lot of positives to take from today,” he said. “I’m heartbroken, but there are a lot of positives. We came, put these cars together quick, had a lot of changes with this team and we came out and led the most laps and were flying. A lot of momentum going into the season.”

Ryan Preece both happy and frustrated with "intense" 500 debut