MOORESVILLE, N.C. (Oct. 29, 2013) - The next seven days will be a dream week for Parker Kligerman. The talented youngster will be pulling double duty at Texas Motor Speedway in Fort Worth, running the O'Reilly Challenge NASCAR Nationwide Series event on Saturday in his No. 77 ToyotaDreamBuild.com Camry for Kyle Busch Motorsports (KBM) and making his NASCAR Sprint Cup Series debut on Sunday in the Swan Racing No. 30 Camry. Monday, the 23-year-old will head to Las Vegas, Nev. for the SEMA Show, where his CamRally will be on display as part of the Toyota Dream Build Challenge and the winner of the competition will be revealed next Tuesday. 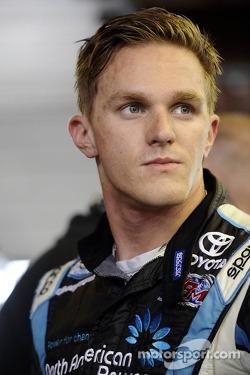 In his first full season in NASCAR's second division Kligerman has collected three top-five and 12 top-10 finishes and ranked inside the top 10 in the championship standings for 28 of the 30 weeks. The Connecticut native has held the 10th position for 14 straight weeks, but in recent weeks has closed the gap on Kyle Larson for ninth. When the series left Richmond (Va.) International Raceway, Larson held a 67 point cushion in the battle for the ninth spot, but over the past five races KBM's talented wheelman has mounted a 'rally' thanks in part to four top-10 finishes and has closed the gap to just 17 points with three races remaining.

The No. 77 team with Kligerman behind the wheel heads to Texas Motor Speedway, a track which he dubs as one of his favorites, which is probably because of his success at the 1.5-mile oval in the NASCAR Camping World Truck Series. In five Truck Series starts in the Lone Star State, he collected two top-five and four top-10 finishes. In last November's event in NASCAR's third division, the Toyota driver started from the 10th position, made his way to the front for 16 laps before being passed by eventual race winner Johnny Sauter with 11 circuits remaining and ended up with a runner-up finish.

The talented youngster hopes that he can add another historic occasion to his "Dream Week" and bring home his first career Nationwide Series win on Saturday. If Kligerman can do that, it will most certainly help as he continues to 'rally' his way towards ninth-place in the championship standings.

Can the extra practice you'll get with running the Sprint Cup Series race this weekend help you in the Nationwide Series? "First off, it is going to be a really exciting deal being able to realize a dream and make my first start in the Sprint Cup Series. It's a culmination of a lot of years of hard work to get to the top of the sport and there are so many people that have supported me along the way. With that said, hopefully running both the Nationwide race and the Cup race this weekend will be a benefit to both teams. The Cup cars are a lot faster, so hopefully I can take some of the things I learn on that side and bring it over to the Nationwide side. Most of all, just the added seat time and the added track time -- especially after two weeks off -- will be beneficial. The paint scheme we have on the No. 77 Camry is really cool this weekend -- it's a retro paint scheme that looks like my CamRally for the Toyota Dream Build Challenge -- and it would look even cooler in victory lane. We've had fast Camrys recently, so I'm confident that we can have another strong run this weekend and hopefully compete for the win."

Are you happy with how your CamRally turned out for the Toyota Dream Build Competition? "Detroit Speed did an amazing job with the CamRally -- after working with them I can see why they are the defending champs. When I walked in and they unveiled the finished product, I felt like a five-year-old at Christmas. It was like taking your favorite Hot Wheels car as a kid and turning it into a real car that you can drive on the streets. With the help of their many partners, they were really able to put all the bells and whistles on this car and they left just enough room in the trunk for us to bring the trophy from the Toyota Dream Build Challenge back to Kyle Busch Motorsports for the second straight year. Kyle was able to win last year, this year I'm the only NASCAR driver in the competition, so we need all the loyal fans out there to 'rally' around us and go to ToyotaDreamBuild.com starting Thursday and cast their vote for the CamRally. Win or lose, it was a really cool project to be a part of and I have to thank everyone at Toyota and KBM for allowing me the opportunity."