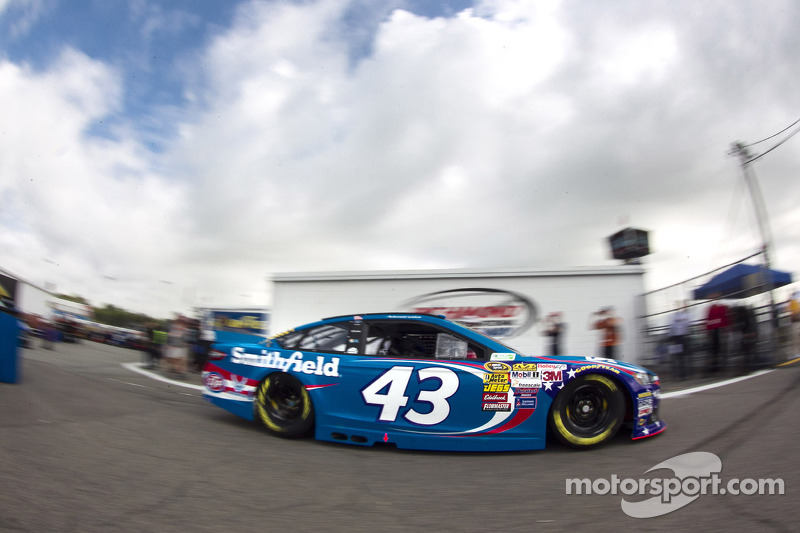 Richard Petty wasn’t at Daytona on Sunday but reveled in the victory via phone.

DAYTONA BEACH, Fla. – The rain and the wrecks kept on coming at Daytona International Speedway in Sunday’s 56th running  of the Coke Zero 400 Powered by Coca-Cola.

When the carnage from  two major contender-claiming incidents was over, it was Aric Almirola who not only survived but claimed his first career NASCAR Sprint Cup Series victory and took the giant step of punching his ticket into the Chase for the NASCAR Sprint Cup.

Running the iconic No. 43 with the U.S. Air Force on the hood for July 4 weekend, Almirola’s win came on the 30th anniversary of team owner Richard Petty’s 200th Cup victory.

“I’m more concerned with getting my first win than what happened 30 years ago,” admitted Almirola during the race’s third red-flag delay for a thunderstorm that eventually halted the race with 48 scheduled laps remaining.

Not that Almirola, who edged Brian Vickers and Kurt Busch for the win, had no sense of history or what his triumph might mean to Richard Petty Motorsports.

“Man, I just took the 43 car to victory at Daytona,” said Almirola, standing under an umbrella in Victory Lane. “This is amazing.

“I grew up two hours away from here in Tampa and grew up in those stands, watching Daytona 500s and Firecracker 400s -- and grew up dreaming about what it would be like to win here.”

Richard Petty wasn’t at Daytona on Sunday but reveled in the victory via phone.

“Today is the future,” Petty said. “To be able to win a race down there, win it for the Air Force on the Fourth of July, the whole thing is great. We’ve had so many disappointments – and it rained on us today. But it rained on us at the right time.

“You know, I don’t ever give up on anything. Looking back on the  history of Petty Enterprises – the turmoil we’ve been through the last seven or eight years ... I’ve always said is that if I keep working on it long enough, you’re going to overcome all of these things. One win doesn’t get you over the hump but it makes it easier to go on from here.”

With the No. 43’s first victory at Daytona since 1984 and first Cup win at any track since John Andretti’s victory at Martinsville Speedway in 1999, Almirola can now dream about what it will be like to pilot the No. 43 in the Chase.

“Yes, and deservedly so for this race team,” he said. “Now we’re going to be a part of that, to have the opportunity, not only to take (our sponsors) to Victory Lane, but to have that added exposure of the Chase. It is really cool to give back to those people who took a chance on me and took a chance on our race team.”

The victory was the third consecutively for Ford, which last won three in a row in 2005 with victories by Greg Biffle (2) and Carl Edwards.

Biffle, who led the race briefly but finished 29th, predicted chaos when he watched drivers such as David Gilliland, Landon Cassill and Reed Sorenson, not among the points leaders, battling at the front of the field early on. Biffle called it some of the craziest racing he’d ever seen. But he never saw the massive incident on Lap 98 brewing.

“The beginning of (the race) was crazy when the 40 and 36 and 38 were dicing for the lead,” he said.  “Then it calmed down and we had a green-flag pit cycle. (The 26-car crash) was just a chain reaction. This wasn’t (about craziness) at all. This was pretty calm.”

Near the front of the field, Ricky Stenhouse Jr. got a bit loose. Jeff Gordon, looking to avoid him, tapped Tony Stewart and the chaos was on. Jimmie Johnson, Kevin Harvick, Carl Edwards, Kyle Larson and AJ Allmendinger joined Stenhouse and Stewart in the garage with substantial damage.

“A half-lap from getting a competition caution and Stenhouse is going to be a hero,” said Stewart, among the perennial contenders to note of some wild racing at the front of the pack. “I guess Ricky thought it paid something to get to Lap 20. I don’t know what happened to him, but he took out a bunch of good cars right there.”

“It just got loose,” Stenhouse said. “We had a full head of steam. The 24 (Gordon) was pushing me pretty good there and the 33 (Bobby Labonte) pulled out ahead of us and blocked. I checked up a little and all of a sudden we got hit in the left rear. ”

The second incident also began near the front of the pack when Biffle got into the back of the weekend’s NASCAR Nationwide Series race winner Kasey Kahne. That contact sent Kahne and Joey Logano spinning in action that collected a total of 26 cars.

The chaos left Almirola on the lead with Kurt Busch and Brian Vickers in pursuit. It also left Kyle Busch upside down in his Joe Gibbs Toyota.

“I knew it was going to be big as far up (in the field) as I was,” Kahne said. “I was getting hit from behind and I just started spinning. It’s kind of scary. I think my car got airborne. I have never had that happen before and it’s a helpless feeling when you’re getting hit as you are in the air.  I was more concerned when I got out and saw Kyle on his roof. I wasn’t sure why he wasn’t getting out with his car being upside down on the track.”

Kyle Busch was able to manage a bit of levity even after his car was plowed into by Cole Whitt, toppling it onto its roof.

“Just hanging out,” Busch radioed, indicating he was OK. “It felt like a slow carnival ride. I guess that’s fitting for 4th of July weekend but not here in Daytona. I just got T-boned there at the end and it just kind of toppled me over.”

Almirola puts No. 43 back in Victory Lane but looks to future, not past