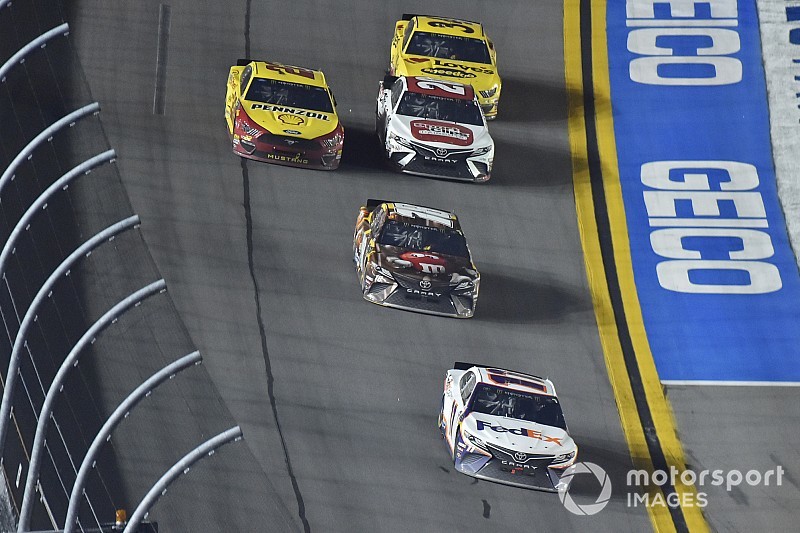 By the looks of his car, it appeared Erik Jones had finished a race at Martinsville more so than Daytona.

But Sunday, Jones managed to drive his damaged No. 20 Toyota up into contention for the win in overtime before hanging on to a third-place finish in the Daytona 500.

Jones’ career-best finish in the 500 – he wrecked out of his first two 500s – gave Joe Gibbs Racing a 1-2-3 finish as his teammate Denny Hamlin picked up his second career victory in the “Great American Race.”

“A day of never giving up and never giving in and it worked out great,” Jones said after the race. “It’s definitely the most perseverance I’ve had in a race in NASCAR. I had a lot of fun.”

It may not have seemed that way during the race.

At one point, Jones had to drop out of pack of cars racing on the backstretch when he suddenly lost fuel pressure.

After making an unscheduled pit stop, his car fired right back up and he returned to the track.

Then on Lap 191, Paul Menard got into the back of Matt DiBenedetto – an incident that eventually collected 21 cars, including Jones, who suffered extensive damage to the rear of his Toyota.

Still, his team was able to patch enough of the rear end of the car together to allow Jones to return to the track. Just finishing the race looked to be a miracle at that point.

But thanks to three more wrecks and the ensuing overtime, Jones received one more chance at his first Daytona 500 victory.

“It was a weird day,” he said. “We just lost fuel pressure and we came to pit road and (it) came back. We didn’t change anything, fired it up and went back out.

“Got back on the lead (lap), got caught up in a wreck and got pretty significant amount of damage and we were just trying to get it fixed enough to get minimum speed. As more of the race happened and more and more people wrecked we found ourselves upfront.”

And at the finish, he found himself with his second consecutive top-five at Daytona, following his victory at Daytona last July.

“Definitely the last two times have been pretty good to me. I wish we would’ve had one more lap,” Jones said. “It was actually really fast still and I was having a lot of fun and wish we could’ve got up there with Kyle (Busch) and Denny.

“You never would’ve guessed we would’ve made it one-two-three there by the end, but an awesome day and a good start to the season.”