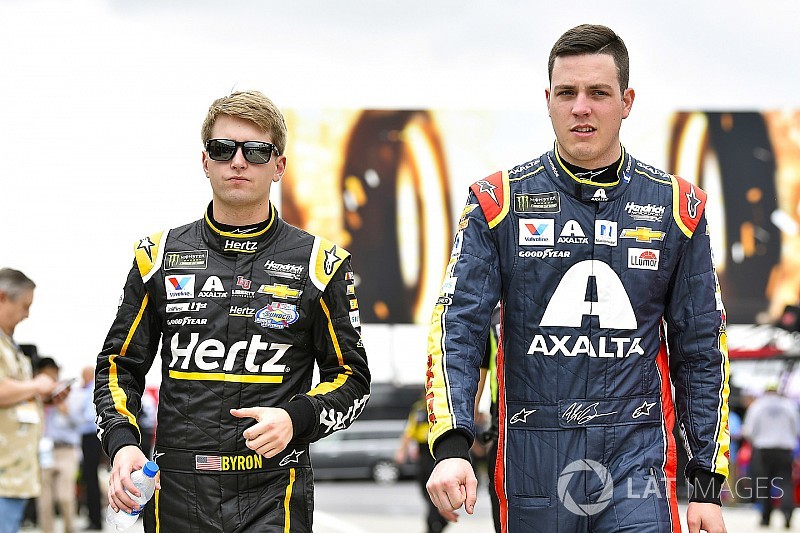 At least five Cup drivers – all but one of them in their first year with their respective teams – will compete in Saturday’s NASCAR K&N Pro Series West race at Sonoma.

It’s not unusual for one or two Cup drivers to enter the event, typically for experience, but the driver count this year is especially high.

Entered in the race are Erik Jones and Daniel Suarez from Joe Gibbs Racing, Alex Bowman and William Byron from Hendrick Motorsports and Aric Almirola from Stewart-Haas Racing. All but Byron has previously competed in a Cup car at Sonoma.

Bowman will be driving in a car prepared by Bill McAnally Racing, while Byron will be with Jefferson Pitts Racing. DGR-Crosley will field cars for Jones and Suarez. Almirola is entered in a car owned by his Cup team co-owner, Tony Stewart.

“I ran the K&N race there three years ago and finished fifth. The biggest thing was just trying to save your tires over the course of the race – you only had one set of tires, so it really teaches you some discipline there,” Byron said.

“It’s a good opportunity to get your rhythm down. Sonoma is obviously a pretty physical track, so you’ve got to be prepared for that when you’re running both races.

“But, it’s more track time and it gives me a better chance to be closer when I get to the Cup race because that’s probably going to be one of the hardest races of the year for me.”

Bowman hopes the experience will help him obtain a better outcome in the road course event.

“I’m not really sure whether or not I like road course racing. I’ve never been able to go to a road course and race in a good car,” Bowman said.

“We will have to wait and see when we unload on Friday. I think this No. 88 Axalta team can be pretty solid this weekend.”

Derek Thorn leads the West series standings while NASCAR Next member Will Rodgers will be looking for his fourth consecutive K&N road course win. Last weekend Rodgers repeated his K&N East victory of a year ago at New Jersey Motorsports Park.

Clint Bowyer riding a "wave of confidence" into favorite track