The 267-lap contest was a forgettable one for Tony Stewart.

The best view Tony Stewart had of Las Vegas Motor Speedway was in his rearview mirror as he left the 1.5-mile oval on Sunday following the Kobalt 400 NASCAR Sprint Cup Series race.

The 267-lap contest was a forgettable one for Stewart. His No. 14 Mobil 1/Bass Pro Shops Chevrolet SS proved to be a handful throughout the two-and-a-half-hour race. 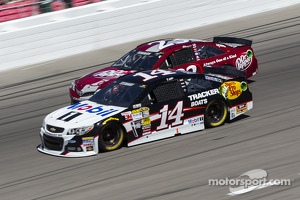 “Loose” is how Stewart constantly described his racecar, and no matter what crew chief Chad Johnston did in an attempt to solve the car’s ill-handling ways, nothing made a lasting impact. Stewart ended the race in 33rd position, four laps down.

It was an uncharacteristic result for Stewart, who won the 2012 Kobalt 400 at Las Vegas.

“Something wasn’t right,” Stewart said after the race.

When the checkered flag dropped, Johnston ordered the team not to touch the racecar. They’ll take it back to Stewart-Haas Racing (SHR) in Kannapolis, N.C., to diagnose its ailment.

Leading the four-car SHR contingent at Las Vegas was Danica Patrick. The second-year Sprint Cup driver wheeled her No. 10 Aspen Dental Chevrolet SS to a 21st-place finish in her second Sprint Cup start at Las Vegas and the 49th of her career.

Kevin Harvick, driver of the No. 4 Jimmy John’s Chevrolet SS for SHR, finished 41st, but the result was not indicative of his performance. Harvick led twice for 23 laps before a broken left-front wheel hub sent him to the garage for repairs. After his team replaced the wheel hub, Harvick returned to the race, albeit 30 laps down.

Brad Keselowski won the Kobalt 400 to score his 11th career Sprint Cup victory, his first of the season and his first at Las Vegas.

There were four caution periods for 18 laps, with only one driver failing to finish the 267-lap race.

The next event on the Sprint Cup schedule is the Food City 500 on Sunday, March 16 at Bristol (Tenn.) Motor Speedway. The race starts at 1 p.m. EDT, with live coverage provided by FOX beginning with its prerace show at 12:30 p.m.