Gaughan walks away from "easy, quick flip" at Talladega 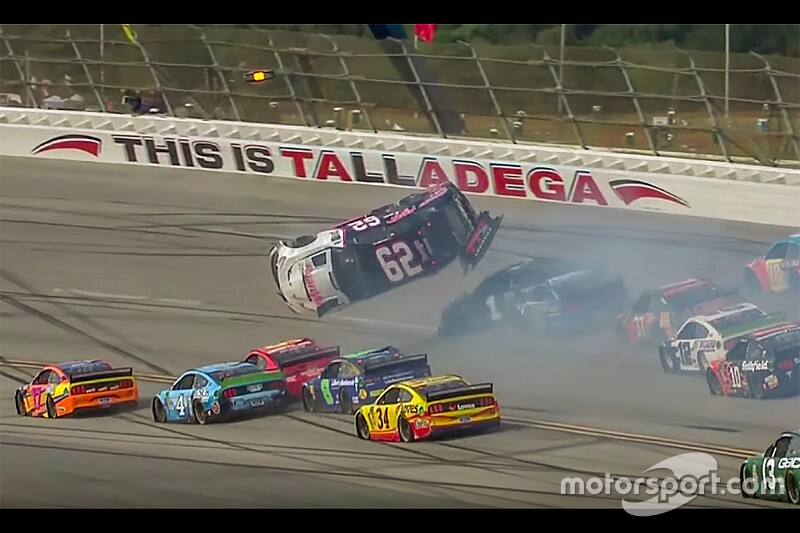 Brendan Gaughan went for a wild ride Monday at Talladega (Ala.) Superspeedway.

Brendan Gaughan was all smiles despite taking a wild ride in the closing laps at Talladega.

The 44-year-old was making his fourth start of the 2019 season, having run the three previous superspeedway races. The veteran driver made his way to the front in the closing laps but as Kyle Busch was turned in front of the field, he had nowhere to go.

Gaughan spun down the track and contact from oncoming cars send his No. 62 Chevrolet Camaro skyward in a spectacular blowover crash. He slammed back on the ground, wheels down as cars spun around him.

The incident ended his day and relegated him to 28th place finish, but he was just proud to have a shot at it.

“Listen, I spent three years in off-road racing and we flip flop.  The easiest thing you can do is go upside down, because nothing hits hard. So that’s the nicest thing about it. I haven’t even seen it, but Brad (Keselowski) was pushing the crap out of me and I loved it.

"But man, the Beard Oil Distributing Chevy, we ran a great strategy. Darren Shaw, Ron Lewis our spotter, everybody…..it was awesome. The 62 was in front for a split second. I was just so proud and thank you to ECR, Richard Childress, Chevrolet and to Darren and Ron and all the guys on this team. The Beard family, I love them. Mother, its okay, its just a flip and it didn’t hurt, I promise."

He walked away from the airborne crash uninjured, explaining: “Yeah, no, it’s okay because you are still going 200 mph that way.  So it never just drops out of the sky. It was okay, it was just one easy, quick flip and we put it down. The only thing you worry about then is somebody hitting you. That is what you don’t want and that is where the fear comes in. Other than that, I am fine."

The race saw exceptionally high attrition with three so-called 'Big Ones' and just 19 cars on the lead lap at the end, several of which were damaged and off the pace.

Ryan Blaney went on to win the race in a thrilling photo finish over Ryan Newman.