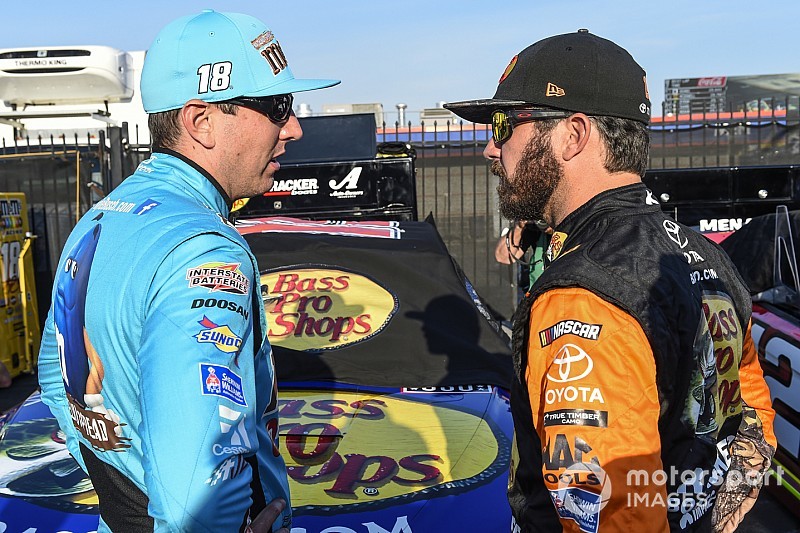 Team owner Joe Gibbs says he was "sweating" over the prospect of having Martin Truex Jr and Kyle Busch in the same outfit for the 2019 NASCAR Cup Series season.

The closure of Furniture Row Racing at the end of 2018 led to Truex moving to Joe Gibbs Racing and linking up with Busch.

The two drivers have gone head-to-head for the drivers' championship most notably in 2017 and '18.

While their rivalry came to a head at Indianapolis in 2017 after the pair clashed on track and their pit crews brawled, their first season as direct teammates has had no flashpoints.

After Truex defeated Busch at Sonoma last weekend, Busch joked he "hated" Truex and Gibbs outlined the challenge in having the pair in his team.

"I've got to tell you the truth," said Gibbs. "When I see two of them like that, one of them coming, I start sweating, because in our history we've had a number of them [rivalries]."

"You got Martin, really kind of cool, easy and calm. Denny [Hamlin] is a lot like that, comes across that way. You have the young kid with Erik [Jones], kind of soaking everything up.

"Then you got Kyle. I won't use any adjectives with Kyle. Those guys, it's interesting to watch them. The way they work together in our meetings it's fascinating. Everybody shares everything."

Truex was asked how he felt about NASCAR's TV coverage building up the rivalry between himself and Busch.

Truex, the 2017 Cup champion, said: "I consider anyone that you have to beat to win races and championships a rival.

"I think it's a good rivalry. We're obviously team-mates. We've been racing together for a long time. We've raced each other really hard but with respect.

"I think that's part of what's made us good team-mates is that we have that mutual respect for each other.

"Kyle hates to lose. Everybody knows kind of how he is. For me, he's just been an amazing teammate.

"He's really smart about his race car, gives great information, helps the team make the cars better. We're all better for it."

Truex added that he did not "keep score" of his results against Busch, and doubted his team-mate did either.