Gilliland's Bristol Record a Reason to Root for A&W Car

Driver of No. 38 Ford Always Fast at Fan-Favorite Track

STATESVILLE, N.C. (March 12, 2013) - David Gilliland always brings some extra speed to Bristol (Tenn.) Motor Speedway. This week, he's also bringing a new paint scheme. The No. 38 Ford will feature the brown and orange scheme of A&W Restaurants for this weekend's Food City 500 at the .533-mile oval.

Fans have a good reason to root for the root beer car. Gilliland has always been fast and a strong qualifier at the fan-favorite short track. His finished 20th in his most recent visit to Bristol last August and has a career-best ninth-place finish among his 13 Sprint Cup starts. 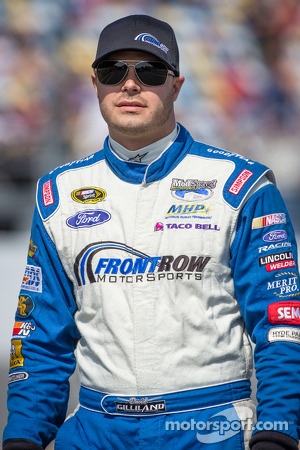 "We feel like we've been really competitive as an organization at Bristol for the last couple years. So, we're excited about going back. For me, the reconfiguration didn't really change the racing much at all. You still get so much momentum up high, as long as you can run up there, and it's hard to pass down on the bottom. So it's still the same old Bristol. We feel like we had a great package that has given us a lot of good speed there the past couple years, so Bristol is definitely a highlight on our schedule.

"We're going to have A&W on our Ford Fusion for the first time this year. It's always a fan favorite. People love A&W restaurants and the fans always liked when we've had them on the car in past seasons. It's just one of those classic, all-American places to go for good food. And you can't beat one of their root beer floats.

"I really do like short-track racing. Bristol and Dover, and tracks like that, have been some of our strong tracks as an organization. And the other short tracks, like Phoenix, Richmond and Martinsville where we haven't been as strong, we're taking a new package this year. Frank Kerr, my new crew chief, has brought some neat things to our organization that I think are really going to help us at those flatter tracks, so I'm looking forward to being more competitive at those places as well.

"I'm feeling good about our intermediate program, too. Last week at Las Vegas, we had a really good car and made a lot of positive changes that gave us a fast car for race day. The mile-and-a-half's have always been the races that we've needed the most improvement on. And we're seeing that improvement, and it's gratifying. Overall, this team is making huge strides."

Ragan likes his chances for the Bristol 500