Hamlin ended one Cinderella story in hopes of writing his own

Denny Hamlin knew his win Saturday night at Bristol (Tenn.) Motor Speedway would not be popular but for him it was necessary. 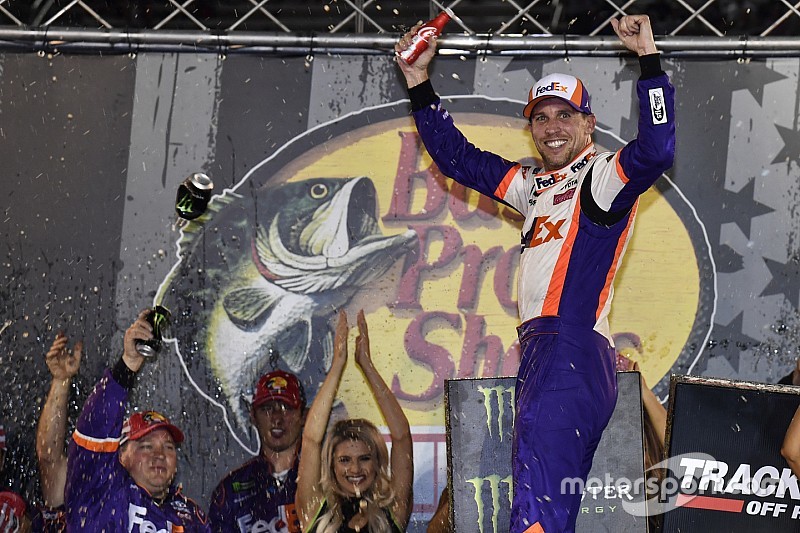 A crazy set of circumstances unfolded the week leading up to the race with Matt DiBenedetto being told he would not be returning to Leavine Family Racing’s No. 95 Toyota next season, because of what is expected to be the addition of a new Joe Gibbs Racing driver.

Then DiBenedetto – who had been fast all weekend – finds himself in the lead late in the race with the opportunity to pick up his first career NASCAR Cup Series win.

That was until Hamlin, 38, ran him down and passed him with 11 of 500 laps remaining to take the victory, leaving DiBenedetto in a disappointing but still career-best second-place.

“I get it. I understand. There’s some special circumstances there, for sure. It is a tough business at times,” Hamlin said after the race. “But Matt is doing a phenomenal job of showing his résumé in front of everyone.

“So, he doesn’t need to type it out.  He’s going out there and performing. He will land as good or better on his feet, I am certain of it, after this year.”

While DiBenedetto and Hamlin have never been close friends, Hamlin said he could relate to the driver’s difficult claw up NASCAR’s career ladder.

DiBenedetto, 28, in an effort to showcase his talent, left a lower-level team last year to sign a one-year deal with LFR, which has a technical alliance with JGR. He’s done what he set out to do – turning in the best finishes of his career in the last two months.

“I believe in his talent. I believe he should be on the race track,” Hamlin said. “There’s a lot of people that believe in Matt. Yes, he’s been clawing and clawing these last few years. But you would also argue and say that he’s gotten better and he’s gotten better rides year after year. I would hope that trend would continue next year.

“I think a lot of people have a lot of respect for him. He’s humble. This is not a story of he’s just going to go away. This is only the beginning for him.”

For Hamlin, the win continued what has been one of the best seasons of his career – one he hopes will culminate with his first series championship.

And while he was well aware of the fairytale ending he would ruin by passing DiBenedetto for the win, there was no alternative.

“I knew I was going to get him. I just was thinking about it the whole time,” Hamlin said. “There’s a lot of people at home, a lot of people in the stands that don’t want to see this happen, but it’s going to happen.

“It stinks. I’ve been doing this now for 14 years. I haven’t won a championship. To win a championship, you must win in the regular season unless you think you’re going to win the final three races in the second to last (round).

“I’m going to be in a better position this year than I’ve ever been as far as playoff points are concerned. Just comes from a lot of hard work. We’ve really worked hard to get in this position.”