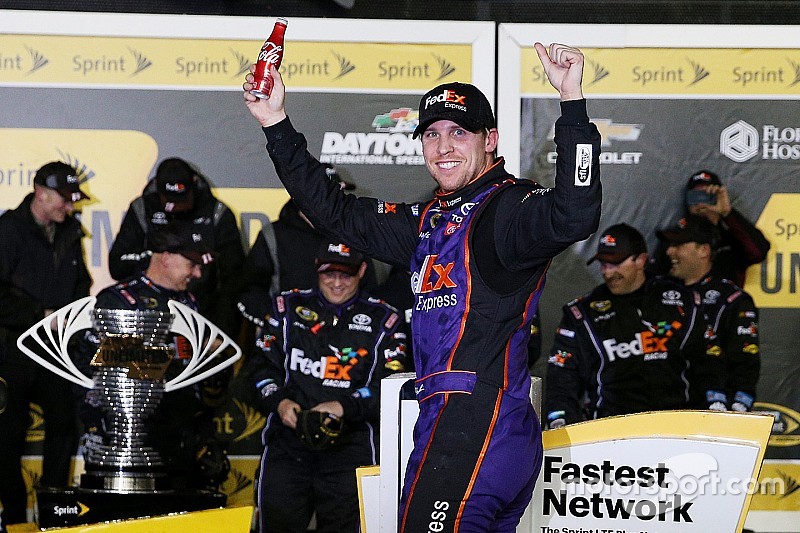 And despite NASCAR’s new overtime procedures, the race still ended under caution, as a six-car wreck erupted on the second of the two-lap overtime which forced NASCAR to throw a caution before Hamlin took the checkered flag.

The win is Hamlin’s third in the event.

“We’ve got such a young team – crew chief, engineer – they all look like a bunch of high school kids. They did a great job. I’m so happy for Mike Wheeler (crew chief) – he’s 1-for-1 with a good win here at Daytona,” Hamlin said.

“This win couldn’t be possible without my teammates who sacrificed so much and pushed me at the right times. It was a total team effort just like Kyle (Busch’s) championship – we win as one. This is a Joe Gibbs Racing win.”

Hamlin warded off a late run from Menard to retain his lead.

“When cars are closing that fast you almost have to anticipate where they are going to go or else you’re going to get wrecked,” Hamlin said. “Luckily it worked out for us. This is a leader-driven race as we’ve seen and thankfully we were able to bring it home.”

On Lap 44 of the scheduled 75, Jimmie Johnson was making a move up the middle of the field when Mears came down and sent him spinning down off the track and into the infield grass. It marked the fifth consecutive year Johnson has wrecked out of the non-points race.

The race restarted on Lap 47 with Brad Keselowski in the lead but Hamlin close behind. Over the next 10 laps, the two traded the lead three times.

On Lap 56, Jamie McMurray was pushing Kasey Kahne when Kahne turned into the outside lane and into A.J. Allmendinger to bring out a caution.

The race went back to green with 14 laps remaining and Hamlin and Keselowski continuing to run out front.

On Lap 66, Kahne’s No. 5 Chevrolet went up in smoke and the caution flew once more. The race returned to green with six laps remaining.

With two laps remaining, two incidents erupted at the same. First, Kurt Busch got knocked into the wall just as contact between Carl Edwards and Keselowski on the backstretch, which triggered a five-car wreck.

The wreck sent the race into the first use of NASCAR’s new overtime procedures.

The first 25-lap segment of the Unlimited was married by several incidents on the track.

Ricky Stenhouse Jr. and Hamlin made contact to bring out the first caution of the race. On the restart, Jamie McMurray took over the lead.

Early leader Keselowski had a large piece of trash get stuck on his front grille, which required him to drop to the back of the field in hopes of trying to get it dislodged. He was about to pit under green when Brian Vickers has a tire go down while racing in the middle of the pack.

The incident with Vickers collected a total of seven cars, including Dale Earnhardt Jr., Clint Bowyer, Kurt Busch, Allmendinger and Kevin Harvick. Harvick and Bowyer were forced out of the race with damage.

Is the Daytona 500 shaping up to be a Penske vs. Gibbs battle?