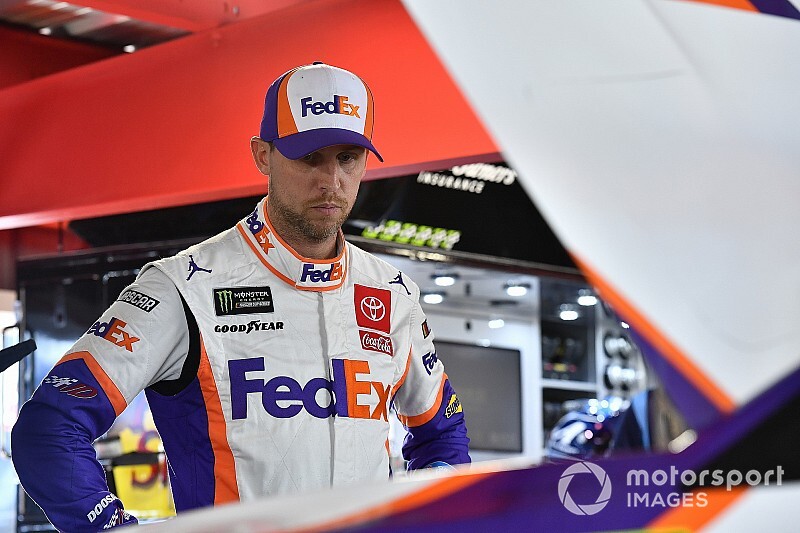 On Lap 458 of 500, the two title contenders were battling side-by-side around the half-mile short track. As they exited Turn 4, Joey Logano got into the outside wall after contact with Denny Hamlin.

The result was a cut left rear tire and a spin for the reigning series champion.

Hamlin went on to finish fourth while Logano would rebound to eighth.

After the checkered flag, the two drivers engaged in a heated discussion that quickly escalated into pushing and shoving. Within moments, Hamlin was on the ground and crew members were going at it.

"We were having a discussion, everything was civil, and then like Joey does, he does a little push and then runs away," explained Hamlin.

He continued: "I got close off of Turn 4. It looks like we got together, and it looks like collateral damage. He blew a tire. I mean, he would probably say, 'oh, short track racing,'" Hamlin quipped in a mocking fashion.

Logano admitted "maybe I shouldn't have shoved him at the end," but defended his frustrations following the race.

"You know, at the end of the day we still got a decent finish out of it and some points in the stages at least. But a little frustrated with the situation. I wanted to talk to him about it, and maybe I shouldn't have shoved him at the end.  It may have escalated it a little bit more. It's frustrating. There's a lot of passion out there.

He later added: "Just the playoffs. It just happens. It's part of it. Emotions run high."

Logano leaves Martinsville on the bubble (fourth in the standings), 14 points above the cut line. Hamlin is 24 points up and currently sits second in the standings behind Sunday's race winner Martin Truex Jr.

Joe Gibbs gave his own perspective on what happened. "There is so much at stake," he said. "I'm not sure everything that happened but I always leave that up to the drivers. When there is a lot at stake and it's Martinsville, that brings out a lot of passion and its one of those things that happens."

Byron willing to do "whatever it takes" for first Cup win