Denny Hamlin became the eighth different winner in ten races this season with his win Sunday at Talladega Superpseedway.

The No. 11 Joe Gibbs Racing Toyota of Denny Hamlin was in front of the field six different times, and for a total of 12 laps in the Aaron's 499 NASCAR Sprint Cup Series race at Talladega (Ala.) Superspeedway Sunday. He was up front when it counted to claim his first win of the 2014 season. With the victory, Hamlin became the eighth different winner in the first 10 races.

"We really just want to win races, regardless of the implications to get in the Chase," Hamlin said.

The win comes after a second-place finish in the one other restrictor plate race, so far, this season -- the season-opening Daytona 500 in February.

"Feels good to come to these kinds of race tracks and know we can win," Hamlin said.

Greg Biffle finished second in the No. 16 Roush Fenway Racing Ford after leading a race-high 58 laps in the 188-lap race. Clint Bowyer finished third in the No. 15 Michael Waltrip Racing Toyota.

"I had a chance at him (Hamlin) getting into one; Clint gave me a big push," Biffle said. "The caution came out, and I said, 'Dang it!'" The race ended under yellow after the No. 51 HScott Motorsports Chevrolet of Justin Allgaier got turned just as the front of the race field took the white flag. The race remained green for a moment before debris fell off of Allgaier's car, necessitating the yellow flag.

In all, there were eight cautions in the race, with only two coming in the first 100 laps. The No. 2 Team Penske Ford of Brad Keselowski spun after contact with the No. 10 Stewart-Haas Racing Chevrolet of Danica Patrick to bring out the first caution on lap 14th. The other caution in the first 100 laps came out for debris on lap 50.

"We took the lead there and made a really aggressive move to take the lead and then it all just kind of bottle-necked from there," Keselowski said. "I don't know if I cut somebody off or got ran over, but just enough to get spun out and tear the car up."

The third caution of the race on lap 105 was to repair a caution light. The first caution for a large multi-car crash came on lap 136 when Keselowski, again, spun and collected the No. 21 Wood Brothers Racing Ford of Trevor Bayne, the No. 33 Circle Sport Chevrolet of pole sitter Brian Scott, the No. 24 Hendrick Motorsports Chevrolet of Jeff Gordon, the No. 20 Joe Gibbs Racing Toyota of Matt Kenseth, the No. 14 Stewart-Haas Racing Chevrolet of Tony Stewart and the No. 7 Tommy Baldwin Racing Chevrolet of Michael Annett.

"I just spun out in front of the whole field," Keselowski said. "I don't know why -- if I just busted my butt on my own or lost I tire -- but I feel bad for everyone that got torn up." 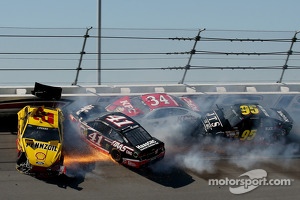 The other large crash came on lap 174 for an incident involving the No. 48 Hendrick Motorsports Chevrolet of Jimmie Johnson, the No. 22 Team Penske Ford of Joey Logano, the No. 41 Stewart-Haas Racing Chevrolet of Kurt Busch and the No. 34 Front Row Motorsports Ford of David Ragan.

"The 48 just started spinning out in front of me, and when he caught it and had to save it, it's Talladega," Logano said. "All of us are in a pack, so when one car gets free, then we all kind of get jumbled up there."

Logano led 25 laps early on in the race, but wound up with a finish of 32nd. Twenty-three drivers were credited with leading laps, taking part in 48 lead changes. The only other driver, aside from Biffle and Logano to lead more than 20 laps, was Dale Earnhardt Jr., who led 26 laps in the No. 88 Hendrick Motorsports Chevrolet. Earnhardt dropped to the back soon after the lap 150 caution and remained outside the top-20 for the remainder of the race. He wound up with a 26th-place finish.

Chevy NSCS at Talladega One: Post race notes and quotes