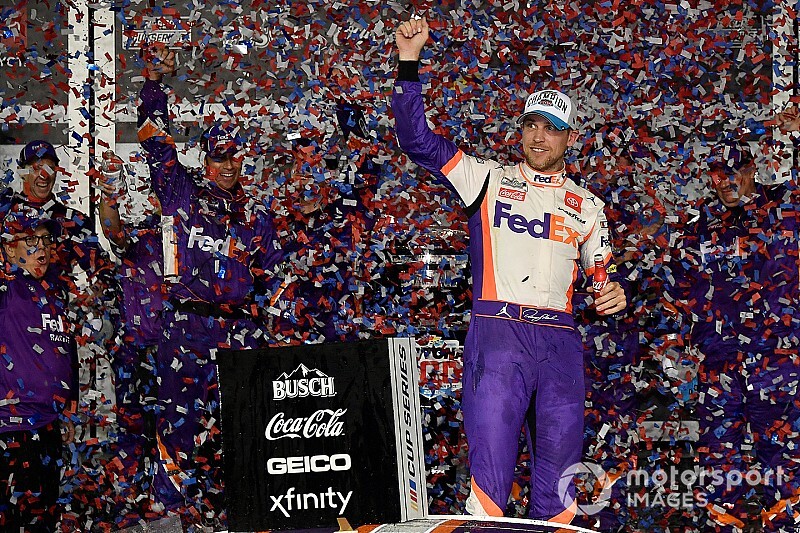 Denny Hamlin emerged as a three-time winner of the Daytona 500 as Ryan Newman’s No. 6 Ford flipped on the last lap and ended up on its roof.

Hamlin led on the restart to the second overtime and the battle on the final lap ended up involving Newman, Ryan Blaney and Hamlin.

Blaney got into Newman, sending him into the wall and into the car and his car was then hit again by Corey LaJoie. Meanwhile, Hamlin drag-raced with Blaney to the finish with Hamlin edging him at the finish line.

Safety crews worked to turn Newman’s No. 6 Ford upright and Fox Sports reported that once Newman was extracted from the car, he would immediately be taken to a local hospital.

UPDATE: Ryan Newman in 'serious' condition but with 'non-life-threatening' injuries

UPDATE #2: Ryan Newman "awake and speaking with family and doctors"

"I think we take for granted sometimes how safe the cars are.  But No. 1, we're praying for Ryan. Worked really well with Ryan through this whole race, and obviously he got turned right there," Hamlin said after the win. "Proud of our whole FedEx team. I don't even know what to say.  It's so unexpected. I mean, I knew they were going to come with a big run there. My job was to just make sure I didn't put a block that was going to wreck me, live to race another corner.

"We got to (Blaney's) bumper, got to pushing him there, and I knew I was going to give him a big run, and it was going to ‑‑ the race wasn't over, and obviously it worked out well for us at the end there. Great to have the team celebrating back‑to‑back ‑‑ I can't even tell you what it means to me."

Asked about his success in the 500, Hamlin said, "I just feel like I'm a student to the game. I never stop learning and trying to figure out where I need to put myself at the right time. It doesn't always work. The odds have definitely ‑‑ we've defied odds here in the last eight years or so in the Daytona 500, but just trust my instincts, and so far they've been good for me. I can't do it without the car. That's making it capable for me to make those race‑winning moves."

It’s the second consecutive Daytona 500 victory for Hamlin and third overall (his other was in 2016).

Following the break between Stages 2 and 3, all of the lead-lap cars elected to pit with Hamlin the first off pit road.

During the pit stops, Martin Truex Jr. slammed into a fuel can left on pit road by another driver and may have suffered some damage to the nose of his car. It turned out to be Chase Elliott’s gas can and Elliott had to restart the race from the rear of the field.

The race returned to green on Lap 137, Hamlin was followed by Blaney and Joey Logano. Blaney quickly moved into the lead on the restart with a push from Logano.

On Lap 138, Ricky Stenhouse Jr. grabbed the lead thanks to a push from Ross Chastain. Logano shoved Blaney back in front on the next lap.

Kyle Busch took a turn at the lead with Johnson in tow on Lap 141.

Drafting with Blaney, Brad Keselowski powered his way up to the lead on Lap 149, breaking up the Toyota grip on the front of the pack.

On Lap 161, Stenhouse was penalized for passing below the yellow line on the backstretch and was penalized by NASCAR and had to make a pass-thru on pit road.

With 37 to go, Logano had moved out to the lead, followed by Keselowski and Aric Almirola.

Ford and Toyota drivers elected to make their green-flag pit stops with 30 laps remaining, which allowed Johnson to move into the lead.

On Lap 171, Stenhouse wrecked off Turn 4 after contact with Jones and ended up on pit road as NASCAR elected not to call a caution and keep the race under green.

The remaining Chevrolets who had not pit made their final stop with 26 laps to go.

With 25 laps remaining, Kyle Busch cycled into the lead followed by Logano and Keselowski.

On Lap 181, Kyle Busch began dropping back in the field with smoke pouring out of the back of his No. 18 Toyota and he was forced to head to pit road under green.

With 16 laps remaining, Logano appeared to get into the back of Almirola, who then turned Keselowski, which ended up triggering a massive accident on the backstretch, collecting numerous contenders for the win including Jimmie Johnson, Alex Bowman, Blaney and others.

The race was immediately placed under a nearly 12-minute red flag to clean the track of debris. “I feel like we had a really good car. Made one mistake about a lap earlier. I should’ve covered the bottom better and didn’t,” Keselowski said. “It’s my fault I kind of put myself in position for that.”

Once the race returned to caution, smoke again poured out of Kyle Busch’s No. 18 Toyota and he was forced to take it to the garage.

The race returned to green with 10 laps remaining with Newman out front followed by Bell, Elliott, Logano and Hamlin.

With eight laps remaining, a three-car incident erupted on the backstretch involving Timmy Hill, Reed Sorenson and Bowman to bring out a caution.

The race restarted with four laps to go with Newman out front followed by Logano and Hamlin.

With two to go, Chastain attempted to go three-wide, tagged Ryan Preece and shot up the track and into the wall to place the race under caution again and send it into overtime.

After a red-flag to clean the track of debris, the race returned to green with Hamlin out front followed by Buescher, Harvick, Newman and Clint Bowyer.

Michael McDowell got into the back of Bowyer on the restart on the frontstretch to immediately place the race back under caution and into a second overtime.

The race returned to green with Hamlin still leading followed by Newman, Buescher, Blaney and Harvick.

Stenhouse tried to make a move for the lead off Turn 4 but Hamlin held on for the Stage 2 victory over his teammate Kyle Busch.

Stenhouse end up third, Truex was fourth and Chastain completed the top-five.

Following the break between Stages 1 and 2, most of the lead-lap drivers elected to pit but Hamlin was among those who stayed out and led the way when the race returned to green on Lap 72. He was followed by Custer and Truex.

By Lap 75, Toyotas claimed the top five positions as Hamlin remained out front.

With 45 laps remaining in the second stage, Hamlin picked up some debris on his front grille, which began to spike his engine temperatures.

On Lap 90, Almirola got into Quin Houff on the backstretch in an incident that also collected B.J. McLeod to bring out a caution. Harvick also appeared to catch some damage in that incident.

All of the lead-lap cars elected to pit with Hamlin the first off pit road followed by Stenhouse and Kyle Busch. The race returned to green on Lap 96.

With 30 laps remaining in the stage, Hamlin remained out front followed by Stenhouse, Kyle Busch and Keselowski.

After 115 laps, Hamlin and Stenhouse continued to work well together while pacing the field. Kyle Busch was third, Truex was fourth and Chastain fifth.

Elliott held off Hendrick teammate, Bowman, in a two-lap dash to claim the Stage 1 win.

Almirola was third, Logano fourth and Johnson completed the top-five.

Just as the 500 was set to begin on Sunday afternoon, rain caused the cars to be immediately sent to pit road.

The race actually took the green flag at about 4:20 p.m. ET Sunday. Stenhouse, the pole-winner, led the first 20 laps until rain brought a quick halt.

The track never got dried to restart before very heavy rains – part of a large front – set in before 7 p.m. ET.

The race resumed at 4:12 p.m. ET Monday and everyone elected to pit when the race returned to caution. On the restart, Keselowski led the field.

On Lap 44, Elliott got pushed into the lead for the first time, thanks to his three Hendrick teammates.

With 10 laps to go in the stage, Elliott remained out front followed by Johnson, Bowman and William Byron.

On Lap 58, Stenhouse hit Byron from behind, sending him spinning through the backstretch grass and into the wall, bringing an end to his race.

“I’m fine. I got hit from behind and went sideways,” Byron said over his team radio.

On the restart with two laps remaining in the stage, Elliott was followed by Johnson, Bowman, Stenhouse and Almirola.