Hank Parker Jr to race No. 91 at Rockingham

USG to sponsor Evernham Motorsports No. 91 Dodge Intrepid R/T in Rockingham. ROCKINGHAM, N.C. (Oct. 28, 2002) -- USG Corporation, a leading manufacturer of building materials for the construction and remodeling industries, will be the primary ...

ROCKINGHAM, N.C. (Oct. 28, 2002) -- USG Corporation, a leading manufacturer of building materials for the construction and remodeling industries, will be the primary sponsor on the Evernham Motorsports No. 91 Dodge Intrepid R/T for this weekend's NASCAR Winston Cup race -- Pop Secret 400 at North Carolina Speedway. 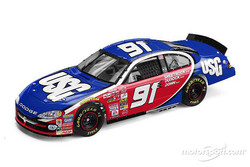 The USG No. 91 Evernham Motorsports Dodge Intrepid R/T that will compete in the Pop Secret 400 in Rockingham; Hank Parker Jr. will drive the car.
Photo by USG/DMF Communications.

As was announced by Evernham Motorsports, NASCAR Busch Series standout Hank Parker Jr. will drive the car as an ongoing research and development commitment to Dodge. It will be a double-duty weekend for Parker. Along with making his first Winston Cup entry, he will also compete in Saturday's Sam's Club 200 Busch race.

"It's pretty incredible to get this kind of support from a company as respected as USG," said Parker. "It's an honor to be a part of Ray's research and development program with Dodge and I certainly appreciate their support and now the support of USG. With the USG colors on the No. 91 Dodge, it should be a rock solid weekend."

The USG logo will be displayed on the red, white and blue No. 91 Dodge along with three of the company's flagship brands -- SHEETROCK® (drywall), DUROCK® (cement board tile backer) and DONN® (ceiling suspension system).

"USG has been a supporter of NASCAR for several years as the official building materials supplier," said Fareed Khan, vice president, marketing USG Building Systems. "We are excited about supporting Hank Parker Jr.'s introduction into the Winston Cup Series. "The Rock" could not be a better race for us given the nice tie-in with our key brands -- SHEETROCK®, DUROCK®, FIBEROCK® and DONN®."

USG Corporation, based in Chicago, is a Fortune 500 company with subsidiaries which are market leaders in their key product groups: gypsum wallboard, joint compound and related gypsum products; cement board; gypsum fiber panels; ceiling panels and grid; and building products distribution. For more information about USG Corporation, visit the USG home page at www.usg.com.