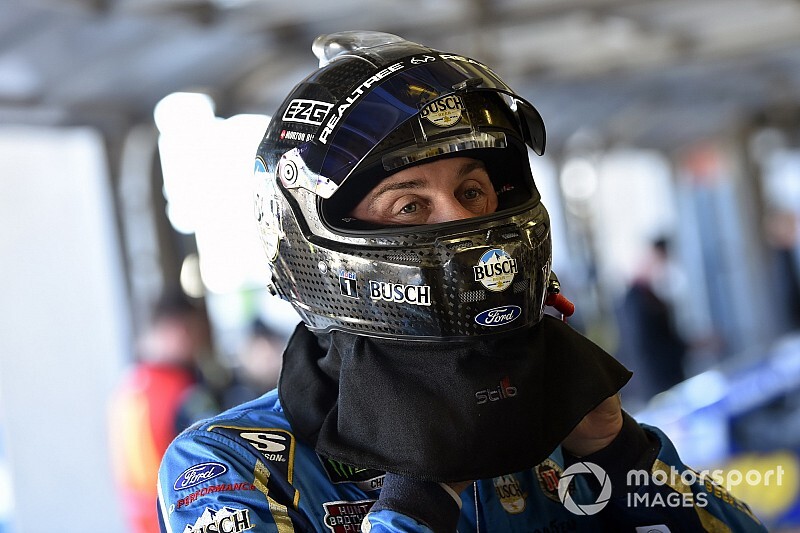 A caution for Denny Hamlin set up a restart with one lap remaining in the 85-lap stage. Bowyer was the leader and raced side-by-side until Harvick cleared him for the lead in Turn 3.

Harvick started on the pole but Erik Jones nipped him at the line to lead the first lap. Harvick reclaimed the lead on Lap 2.

On Lap 9, Chase Elliott slammed the wall hard on the exit off Turn 2 to bring out the first caution. The damage to Elliott’s No. 9 Chevrolet was extensive.

“Sorry, dude. I was trying to roll that top there. I just slipped,” Elliott said over his team radio.

A handful of drivers elected to pit but Harvick remained on the track and in the lead when the race returned to green on Lap 13.

Harvick and Jones raced side-by-side but the race was placed back under caution on Lap 16 for several pieces of debris in Turn 3.

Several drivers elected to pit including Jones, Joey Logano, Kyle Busch and Brad Keselowski. On the restart on Lap 20, Harvick continued to lead the way.

With 50 laps remaining in the stage, Harvick had built a 1.3-second lead over Aric Almirola as their SHR teammate Daniel Suarez remained in third, 3.5 seconds behind the leader.

Corey LaJoie hit the wall off Turn 4 on Lap 42 to bring out another caution. Many of the lead-lap cars elected to pit but Jones remained on the track and inherited the lead.

On the restart on Lap 48, Jones was followed by Bowyer, Kyle Busch, Martin Truex Jr. and Keselowski. Harvick lined up eighth, the first off pit road.

Bowyer got around Jones on Lap 49 to take the lead for the first time in the race as Truex dropped to third and Harvick moved up to fourth.

Keselowski slid and hit the wall off Turn 4 on Lap 54 and Ricky Stenhouse Jr.’s No. 17 Ford did the same thing behind him to bring out a caution. Both cars ended up in the infield grass and suffered extensive damage.

“I busted my butt. I was pushing really hard trying not to lose positions. I pushed too hard,” Keselowski said after his wreck.

A handful of drivers pit but Bowyer remained on the track and held the lead on the restart on Lap 63. He was followed by Jones and Harvick.

Harvick got around Truex in Turn 3 to take second on Lap 64.

Corey LaJoie hit the wall between Turns 3 and 4 on Lap 73, which placed the race under caution.

A few drivers pit and Suarez was penalized for speeding on pit road during his stop and had to restart from the rear of the field.

Bowyer remained in the lead on the restart on Lap 77 followed by Harvick, Truex and Kyle Busch.

Hamlin spun off Turn 4 on Lap 80 and slid into the infield grass to bring out another caution. His No. 11 Toyota suffered a good amount of damage from the incident. The race restarted with Bowyer in the lead with one lap remaining in the stage.