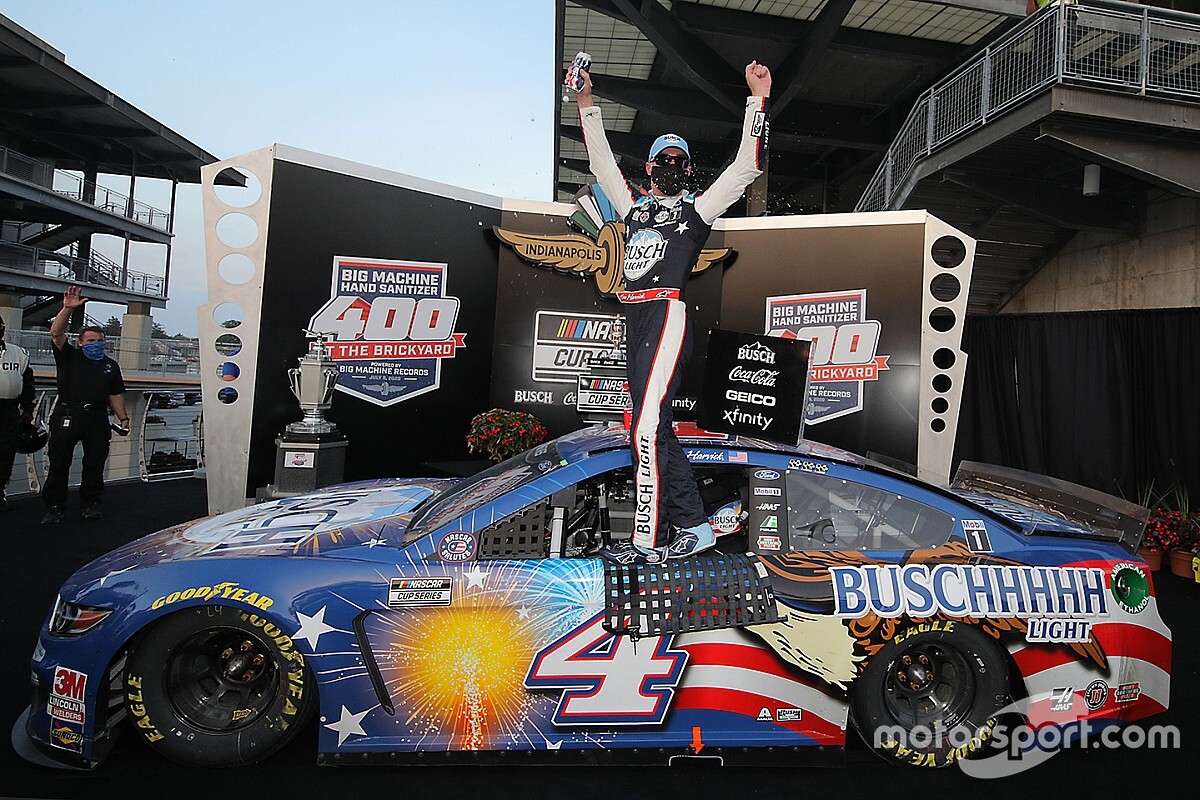 With his top challenger sidelined late in the race, Kevin Harvick claimed his second consecutive Brickyard 400 victory and third of his career.

Harvick got a big push from Stewart-Haas Racing teammate Cole Custer on the start of a two-lap overtime and held off Matt Kenseth to win Sunday’s Brickyard 400 at Indianapolis Motor Speedway.

Harvick led the most laps (68) but didn’t grab the lead for the final time until then-leader Denny Hamlin blew a right-front tire with six of the scheduled 160 laps remaining.

The win is the fourth of the NASCAR Cup Series season for Harvick, all coming since the sport restarted in May from a two-month hiatus due to the COVID-19 pandemic. It’s also the 53rd win of his career.

“We knew (Hamlin) was gonna be really close on tires and Rodney (Childers, crew chief)  told me on the radio he said, ‘Just make sure you keep the pressure on him,’ and that was all the pressure I could give.  Those guys do a really good job," Harvick said. "I’ve just got to thank everybody who is a part of this program and just keeps bringing good race cars to the race track.

Asked about his three-wide move in the race to grab the lead, Harvick said: "I didn’t have anymore room. That was for sure, but it’s the Brickyard. This is what i grew up wanting to do as a kid, win at the Brickyard and to be able to come here and have won for the third time is something that I could have never dreamed of. I want to say hi to my family at home. I know Keelan will be jacked up. Piper is probably asleep. If not, hello. But just really, really proud of all these guys on this team.

Harvick joins Kyle Busch and Jimmie Johnson as the only drivers to win back-to-back Brickyard 400s.

Following the break between Stages 2 and 3, most lead-lap cars remained on the track and Harvick continued to lead on the restart on Lap 106.

With 50 laps to go in the race, Harvick had built a solid lead over Hamlin while Chase Elliott ran in third

On Lap 123, several drivers hit pit road to begin a final round of green-flag pit stops which would give them enough fuel to make it to the finish.

Harvick and Hamlin pit one lap apart and Hamlin appeared to return to the running order ahead of Harvick while the stops continued.

The cycle of stops was interrupted on Lap 134 when Alex Bowman hit the wall in Turn 2 to bring out a caution. The top eight cars, including leader Kenseth, had yet to make their stop.

Most lead-lap cars elected to pit with Kenseth the first off pit road. Hamlin, Harvick and Bell stayed on the track and ran 1-2-3 when the race returned to green on Lap 139.

With 15 laps to go in the race, Hamlin maintained a small but steady lead over Harvick as Kenseth remained in third.

After 150 laps, Hamlin’s lead over Harvick held at half a second while Kenseth was third, Almirola fourth and Custer fifth.

On Lap 154, Hamlin – after being warned to take care of his right-front tire – blew it out while leading the race and crashed hard to bring out a caution.

Some drivers elected to pit but Harvick remained on the track and in the lead on the restart heading into the two-lap overtime. He was followed by Kenseth, Almirola, Custer and Keselowski.

Harvick held off Elliott to claim the Stage 2 win after dominating much of the 50-lap segment.

Hamlin was third, Matt DiBenedetto fourth and Austin Dillon rounded out the top-five.

Following the break between Stages 1 and 2, several lead-lap cars elected to pit but Elliott remained on the track and led the way when the race returned to green on Lap 56.

With 40 laps remaining in the second stage, Elliott had built a 1.2-second lead over DiBenedetto while Hamlin was third, Harvick fourth and Kyle Busch moved up to fifth.

After 70 laps, Elliott had expanded his lead to more than 4 seconds over DiBenedetto while Hamlin remained closed behind in third. Kenseth moved into the top-five for the first time in the race.

On Lap 73, Hamlin worked his way around DiBenedetto and into the runner-up position, nearly 5 seconds behind Elliott.

On Lap 75, Erik Jones appeared to have a right-front tire go down and wrecked hard in between Turns 3 and 4 to bring out a caution.

The lead-lap cars all elected to pit and William Byron was the first off pit road thanks to a two-tire pit stop. On the restart on Lap 83, Byron was followed by Austin Dillon, Hamlin, Kurt Busch and Harvick.

Byron had a left-front tire come apart on Lap 84 and dropped off the pace as the caution was displayed. “I mean, how the (expletive) does stuff like that happen so often? I mean our luck is so awful,” Byron said over his team radio.

The race returned to green on Lap 88 with Austin Dillon leading the way followed by Hamlin, Harvick, Kurt Busch and Elliott.

On the restart, Harvick went to the inside and made it three-wide to grab the lead as Ryan Blaney wrecked to bring out another caution.

A handful of cars elected to pit – including Logano and Keselowski – but Harvick remained on the track and in the lead when the race returned to green on Lap 92.

With five laps to go in the second stage, Harvick opened up a 1.7-second lead over Elliott as Hamlin ran third.

Byron led the way on a restart with four of 50 laps remaining and held off Jones to claim the Stage 1 win.

Austin Dillon was third, Elliott fourth and Harvick rounded out the top-five.

Logano, who started on the pole by virtue of a random draw, led the first 12 laps until NASCAR issued a competition caution to allow teams to check tire wear.

Harvick pit right before the competition caution but was not allowed to take fuel. However, he remained on the track while others pit.

As cars headed down pit road, several cars toward the back of the field suddenly got turned sideways and wrecked and a member of Blaney’s pit crew got struck by a car.

Blaney’s rear tire changer, Zach Price, was identified by the team as the injured member and was transported by ambulance to the infield care center. He was awake and alert at the time and gave a “thumbs up” signal.

Price was treated and released from Methodist Hospital. He will travel back to North Carolina with the team for further evaluation.

The race returned to caution after an 11-minute delay. Logano was the first off pit road during the stops and Harvick stayed out and inherited the race lead on the restart on Lap 20.

Truex was held two laps for having too many pit crew members working on his car while under the damaged vehicle policy. Kurt Busch had to restart in the rear for an uncontrolled tire penalty.

After 25 laps, Harvick had moved out to a more than 1-second lead over Logano. Almirola was third, Keselowski fourth and Elliott fifth.

Almirola was forced to pit under green on Lap 31 with what he described as a “terrible vibration.”

On Lap 41, Ryan Newman hit the Turn 3 wall to bring out a caution. He had complained a short while earlier of a vibration.

Most of the lead-lap cars pit with Ty Dillon the first off pit road thanks to a two-tire stop. Byron stayed out and led the way on the restart on Lap 47.

Two drivers had to start the race from the rear of the field – Timmy Hill after his car twice failed pre-race inspection and Allgaier, for a driver change as he was substituting for Jimmie Johnson, who announced Friday he tested positive for COVID-19.