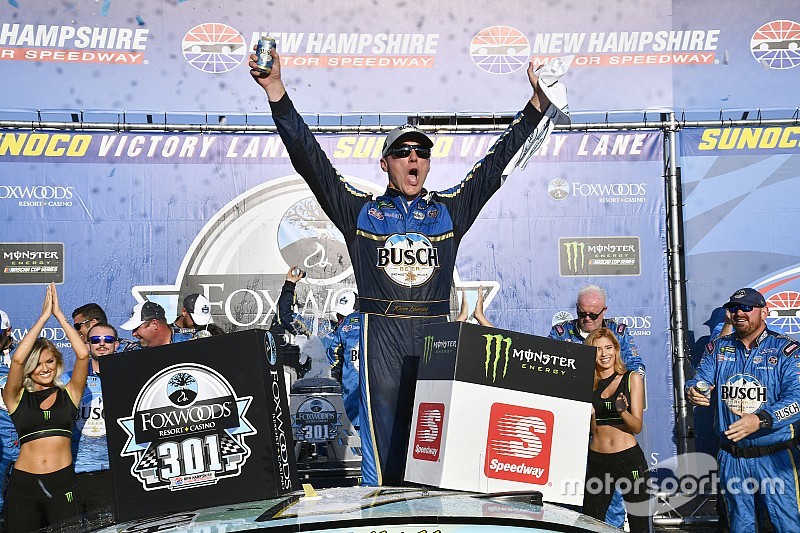 The wait is over for Kevin Harvick and Stewart-Haas Racing.

Harvick and his No. 4 Stewart-Haas Racing team rolled the dice, electing not to pit when most of the lead-lap cars did late in the race to move back to the lead.

Hamlin caught Harvick in Turns 1 and 2 on the last lap and banged fenders but Harvick was able to pull away from Hamlin off Turn 4 and claim the win in Sunday’s Foxwoods Casino 301 at New Hampshire Motor Speedway.

"I didn't think we had the best chance to win today but Rodney (Childers, crew chief) made a great (pit) call," Harvick said. "We had a good car today, we just never could get track position. We stayed out there and ran a lot of good laps.

"I really didn't want to see that traffic there at the end, it may my car tight when (Hamlin) got to me. He tried to move me out of the way down there and I knew that was coming as close as he was. So, I just stood on the brakes - half-throttle down the back straightaway.

Harvick gave a shout-out to the fans in attendance on a very hot and humid day with temperatures in the 90s and a heat index over 100.

"You guys stuck it  out in the heat today and we really appreciate it," he said.

Harvick’s victory snapped a 21-race winless streak. It was the 46th of his career and fourth at New Hampshire.

Following the break between Stages 2 and 3, several lead-lap cars elected to pit with Blaney the first off pit road thanks to a two-tire stop.

On the restart on Lap 158, Hamlin led the way, followed by Harvick, Kurt Busch, Keselowski and Alex Bowman – all of whom did not pit.

After 201 laps, Hamlin continued to hold a stead advantage over Harvick, although Harvick was able to close the gap several times. Kurt Busch remained third, Keselowski fourth and Jones had moved into the fifth position.

On Lap 204, Newman reported he may have dropped a cylinder in his engine but elected to remain on the track.

All of the lead-lap cars elected to pit with Hamlin the first off pit road. On the restart on Lap 219, Hamlin led the way followed by Keselowski, Kurt Busch, Jones and Harvick.

Shortly after the restart, Kyle Larson spun entering Turn 1 and hit the wall which brought the caution back out again.

On the restart on Lap 225, Hamlin led the way followed by Jones, Keselowski, Blaney and Kurt Busch. Blaney powered into the second position shortly after the restart.

With 70 laps to go, Hamlin held about a 1.5-second lead over Blaney, followed by Keselowski, Harvick and Jones.

With 50 laps remaining in the race, Hamlin continued to remain out front and built a 2.5-second advantage over Blaney. Keselowski was third followed by Harvick and Jones.

On Lap 265, Larson hit the wall in Turns 1 and 2 – the second time he had wrecked in the race. With the caution out, most of the lead-lap cars elected to pit with Hamlin once again the first car off of pit road.

On the restart on Lap 273, Harvick – who did not pit – led the way followed by Jones and Truex (who also did not pit), Hamlin and Keselowski.

With 28 laps to go, Hamlin moved into the second position and set his sights on Harvick for the lead.

Almirola holds off Logano for Stage 2 win at New Hampshire