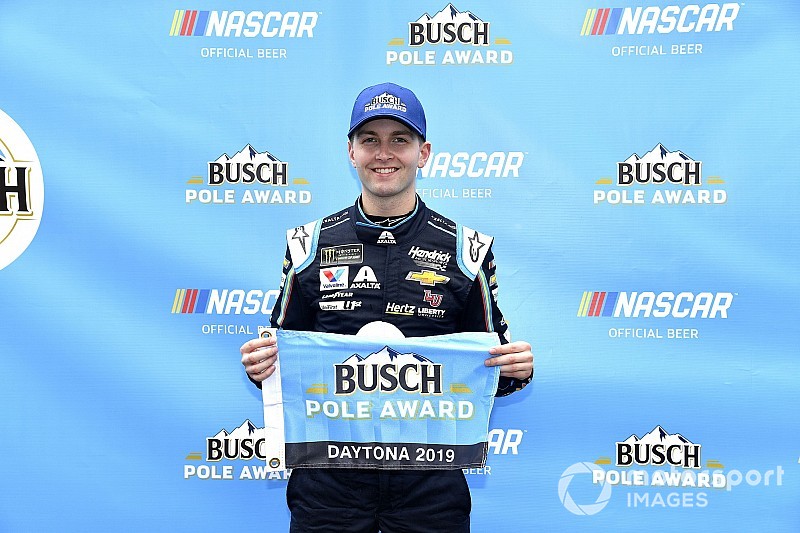 The first weekend of 2019 Speedweeks became all-Hendrick Motorsports production led by a veteran champion and the organization’s youngest addition.

It’s way too early to declare Hendrick Motorsports back to the top echelon of the Monster Energy NASCAR Cup Series but the organization’s performance Sunday at Daytona International Speedway certainly was a good start.

First, HMS’ four Cup series drivers posted the top four qualifying speeds for next Sunday’s Daytona 500, with Willian Byron locking himself into the pole and teammate Alex Bowman joining him on the front row for the season opener.

Hours later, Jimmie Johnson – who hadn’t won a race in the Cup series in more than a year – took the checkered flag in the Advance Auto Parts Clash exhibition event in his first race working with new crew chief Kevin Meendering.

“It’s been a pretty awesome day. You know, it’s just unbelievable to have the four cars qualify like that, and then to have Jimmie win the Clash … it feels good,” team owner Rick Hendrick said.

While HMS has not been on top of its performance game in recent seasons, the organization has saved some of its best moments for annual the season opener.

Byron’s pole is the fifth consecutive in the race for HMS and the 21-year-old is the eighth different driver for the organization to win a 500 pole. Last season, Alex Bowman won the pole for the 500 and teammate Chase Elliott claimed victory in one of the qualifying races.

“We put a lot of emphasis on trying to sit on the pole and go for the front row,” Hendrick said. “So, I think we’ve got the speed. We’ve got to get the handling now down, and I think this is our second year with this car, so I think we’re going to be in good shape.”

The debut of the Chevrolet Camaro body style in the Cup series last season provided some performance difficulties for HMS and several other Chevy teams.

While Johnson, Bowman and Byron all went winless in 2018, Elliott picked up the first three races of his Cup career and advanced to the playoffs, eventually finishing sixth in the series standings.

Late last season, HMS announced the 17-year teaming of Johnson and Knaus would come to an end as Knaus would work with Byron in 2019 and Kevin Meendering would become Johnson’s new crew chief.

The two new combinations could not have enjoyed a better debut, with Byron winning the pole for the season’s biggest race and Johnson making a return to Victory Lane.

“This guy has done a lot over the off‑season for me to get developed and ready to go,” Byron said of Knaus. “I feel like there’s a lot of things that we’re going through for the first time, but for me it’s kind of being here for the second time (that) feels really comfortable.

“I get to go through the garage the same way, don’t have to worry about the newness of the Cup Series, so I’m looking forward to that, and I know we’ve got a hungry group of guys to go after it with.”

Even though Johnson’s victory in the Clash came with some controversy – he was involved in a late-race wreck with then-race leader Paul Menard while Johnson attempted to pass for the lead – he still appreciated the opportunity the victory provided.

“There’s different pressures put on each team, and certainly outside pressures,” he said. “Somebody came up with a great idea of who’s going to win first, Jimmie or Chad, and then the pressure, can we win again.

“There’s just different things that any and every team and driver deal with, so to work through that today and to win today just kind of, I think, helps with some of that outside pressure on where the team is.”

Menard blames Johnson for huge wreck: “Jimmie does that a lot”