"Martinsville will be an interesting race for me" - Justin Allgaier.

Rookie at the Paper Clip... Justin Allgaier will be making his first NASCAR Sprint Cup Series (NSCS) start at Martinsville Speedway in this weekend's STP 500. Not only will it be his first race at the 0.526-mile track affectionately known as the "paper clip" in a NSCS car, it will be his first career race at the track. Allgaier attempted a NASCAR Camping World Truck Series race in 2005 in the No. 63 truck for Mike Mittler, but did not qualify. Martinsville is the first track this season that Allgaier has not raced at before in any NASCAR national series. 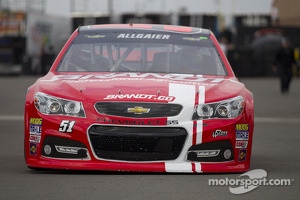 Welcome Aboard... This weekend the No. 51 car will sport a flat black and green paint scheme with AccuDoc Solutions as the primary sponsor. AccuDoc Solutions is based in Morrisville, N.C. and provides billing-statement printing and processing to hospitals and hospital-based physicians. In addition to paper-based billing statements, ADS enables patients to choose electronic statement delivery and make payments through secure online payment portals. To learn more, visit www.AccuDocSolutions.com.

Auto Club Recap... Allgaier made his first NSCS start at Auto Club Speedway (ACS). Allgaier earned his best starting position, 28th, of the 2014 season at ACS. Just over halfway through the race, Allgaier blew a tire and came down pit road for an unscheduled green-flag pit stop. Unfortunately, Allgaier was never able to get back on the lead lap and finished in the 28th position for HScott Motorsports.

Justin Allgaier on Martinsville Speedway:
"Martinsville [Speedway] will be an interesting race for me. I went there in 2005 in a truck and didn't make the race. So it has been a long time since I've been on the track there. Qualifying will be very important there because it is a short track and you can go a lap down so easily. While I haven't raced at Martinsville, I have a lot of memories from there. I used to sit in the stands with my dad and watch races. Fortunately, he's still able to come to most of my races and will be there this weekend, so that will neat. I also wouldn't mind taking home the grandfather clock. It's one of the most well known trophies on the circuit and it would be neat to have in my house."

Busch heads to Martinsville for another good finish

HScott Motorsports will not compete in 2017 NASCAR season