In Earnhardt's absence, Bowman has stepped up 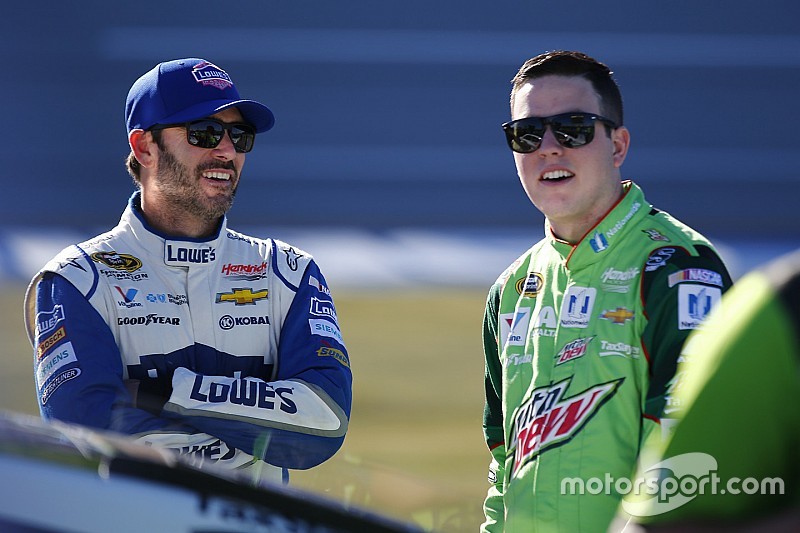 With six wins, five top 12s and 16 top 10 finishes, he’s tied with Jeff Gordon for most victories among this generation of drivers.

On Sunday, neither Gordon or Earnhardt will be in the field for the Hellman’s 500. While fans will hear the roar of engines, that roar from the fans as Earnhardt muscles his way to the point — as he has in all but four of the races he’s run on the 2.66-mile high-banked track — will be missing this weekend.

But Alex Bowman will do his best to win the crowd over.

The 23-year-old racer is substituting for Earnhardt, who has been recovering from a concussion since July. He has split driving duties in the No. 88 Hendrick Motorsports Chevy with four-time Cup champion Gordon.

Working through the pain

Last weekend at Kansas Speedway, Bowman proved again why he was selected for the job.

Bowman suffered from a stomach bug all weekend but qualified fifth. Following contact with Jamie McMurray while running in the top 10, Bowman was forced to pit and dropped to 32nd. While attempting to make up ground, Bowman slapped the Turn 2 wall on Lap 90 and dropped to 36th. Over the final 177 circuits, Bowman wheeled his way to back to a career-high seventh-place finish.

“Monday, I was still getting over it,” Bowman told motorsport.com. “I probably still don’t have the appetite I did before but I’m getting back to eating normal and drinking a lot of fluids to get hydrated.”

In his four previous starts at Talladega, Bowman’s best result was 16th. On Saturday, he qualified the No. 88 Hendrick Motorsports Chevy 19th. Bowman admits he’s “never had a car this good” to race at the 2.66-mile track, but there wasn’t a lot of pack-racing during practice to ascertain what dancing partners he might attract on Sunday.

Coming to a track Dale Jr. has owned in the past

Yes, Bowman has heard the cheers when Earnhardt takes the lead at Talladega. He’s just hoping to find a fellow competitor that can assist his journey to the front.

“A lot of (the fanfare) came with Dale,” Bowman said of the crowd. “He’s such a good speedway racer. I hope that people will want to work with me the same way. Obviously, I think our race car will be just as fast and I’ve got a good amount of super speedway racing experience here in the Cup series.

“So hopefully, we get the same reaction and people will go with me when I make moves. We’ll just have to find out.”

TJ Majors commends the job Bowman has done in Earnhardt’s absence. Majors has spotted for Earnhardt since 2007 and works with drivers in both trucks and the Xfinity Series.

“Alex has done a great job,” Majors said. “I think we’ve had some bad luck. Loudon, where we got backed into on pit road, he had a top-five car. Charlotte, we were running in the top five and had a tire go down. Obviously, he had speed at Kansas and he ran well all day. And Michigan, we were running in the top five and the motor had a wire go bad. I’m just ready to have all the bad luck to be gone.”

Once a rising star in Toyota’s driver development program, Bowman saw his career stall after spending his first two Cup seasons with BKRacing and Tommy Baldwin Racing. Although Bowman was unemployed when 2016 began, Majors believes the driver has made a case for moving forward in the Sprint Cup Series.

“He’s a good young driver,” Majors said. “You don't know that he’s only 23. He doesn’t act like it. He acts like he’s 27. But he’s 23-year-old. That’s pretty young. He knows what he wants from the car. He doesn’t get rattled on restarts.

“I was a little worried about Michigan. He went in there, Jimmie (Johnson) overdrove the corner and Alex didn’t. He has car control. You’re not worried about him sliding up into somebody. The veterans take a little advantage of him on restarts, but they know more. So, that’s part of it.”

Driving for an operation such as Hendrick, Bowman will incorporate a different strategy from the ones he has used in his previous Talladega starts. With three competent teammates and solid equipment, Bowman won’t be as restricted as he's been in the past.

“We have a really fast car. It sucks up really, really well. I was really impressed yesterday. I’m excited for it. It’s the best car I’ve ever had here. I’m ready to go.”

Learning from the best

Despite Earnhardt’s health issues, he has been a selfless mentor for Bowman. On Friday, Bowman flew with Earnhardt from North Carolina to Alabama. The pair discussed drafting and strategy — and will talk again before the race.

“He’s always helpful with anything I have going on,” Bowman said. “Coming here, I definitely sat and talked to him a lot about speedway racing, about drafting, about all of that. It’s been really good to have him as a friend and to lean on — not just him — all of my teammates have been great. It’s been fun just learning what I can and trying to be a sponge and keep my ears open all the time when they’re around.

“But Dale is still a big part of this team — even though he’s not driving right now — he’s still an integral part of the team.”

Since you’ve been gone…

Other than the fans at Talladega Superspeedway, who will miss Dale Earnhardt Jr. the most on Sunday?

“I think a lot of the fast guys will miss him,” Majors said. “A lot of people rely on his experience, his knowledge and his speed to get places. You take that away and they’re just going to be a little bit different. Vice versa, we relied on other guys to get places, too. They kind of bounce off each other.

“The good guys always seem to find their way to the front. We always seem to be able to do it. I definitely think the veterans. You see the 88 car, you know you can get behind him, probably have a good shot of getting up through there.”

Tony Stewart has been a regular on Earnhardt’s dance card throughout the years. He was the pusher behind the No. 8’s victories in this race in 2001 and 2002 and finished third when Earnhardt was second in 2003.

“What made Dale Jr. and I such a good combination is he knew that if he pulled out, I was going with him,” Stewart said. “If we went back to 30th because it wasn’t the right move, so be it. But he knew that if he had the confidence to go, I was going to go with him and I wasn’t going to hang him out. So, you have to have guys like that that you’re willing to work with.”

NASCAR: Points penalty for Truex violation "unlikely" but can't be ruled out