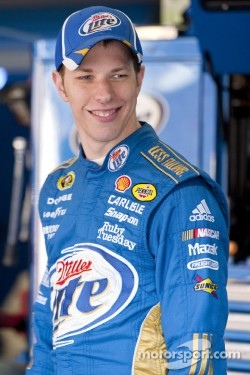 This Week’s Charger… The No. 2 Miller Lite Dodge Charger team will race chassis PRS-805 during Sunday’s AAA Texas 500 at Texas Motor Speedway. This is a new chassis to the No. 2 fleet.

Brad Keselowski on racing at Texas Motor Speedway “Texas really is a unique racetrack and a unique layout. From above it looks like any normal 1.5-mile track, but the transitions into and off of the corners are quite a bit different than Charlotte, Las Vegas or any of the other mile-and-a-halfs. There is a lot of banking into the corners, which means you can carry a lot of speed in and to the center of the turns, but you lose that speed on exit as the track flattens out. It’s difficult because normally you can carry the same amount of grip and speed on both corner entry and corner exit. You have to adjust accordingly and sometimes that’s hard to do at 180 miles per hour. It’s easy to find yourself in trouble, especially off of Turn 2.”

Brad Keselowski on his fourth-place position in the Chase with three races remaining “We put ourselves in position to have a great day at Martinsville on Sunday, but that wasn’t in the cards. That’s what happens late in a race on a short track. We took a hit in the points, but this team has been the underdog all year long. We’re not going to stop doing the things that put us in this position. Twenty seven points is not insurmountable. We’re going to need a little help, but there are guys that are due to have something go wrong over these last three races. At the end of the day, we have speed in our cars and that will win out more often than not.”

Crew chief Paul Wolfe on Texas Motor Speedway “Texas is a place with a lot of unique characteristics. The track has bumps in Turn 2 and has aged to where grip becomes a big factor late into a run. We want to set the car up to run the bottom of the track, but yet, still have the flexibility to run various lines through the corners. This is a new car for us this weekend – a new specification that we’ve developed at Penske Racing. We’ve rolled out several new cars during the Chase and have been very happy with their performance. Brad has shown that he knows how to get around these 1.5-mile tracks and I think we’ll have a solid weekend at Texas.”

Jeff Gordon set to run to the front at Texas II