Jeff Gordon's advice to drivers: Fans want to see the 'true you'

Jeff Gordon’s career as a NASCAR broadcaster has proved to be an “eye-opener” in at least one respect. 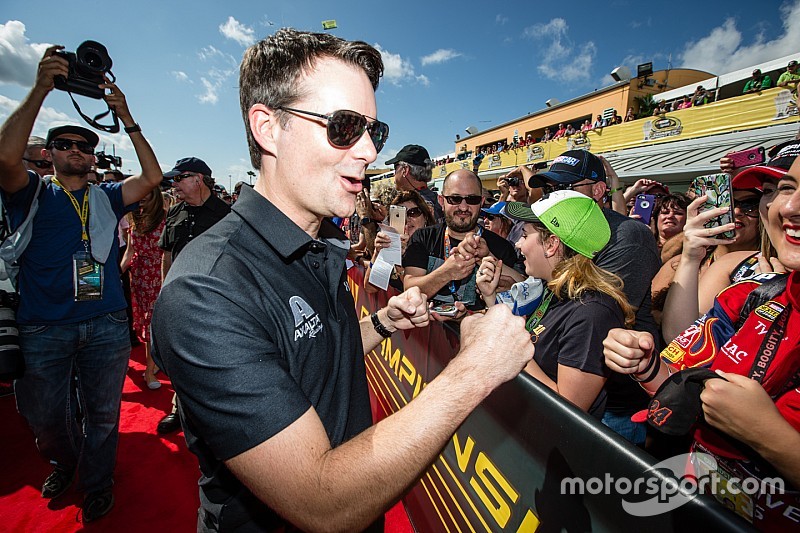 In a recent interview with Motorsport.com regarding his decision to sign a contract extension with Fox Sports, Gordon said his move to the broadcast booth has helped shed a new light on one aspect of a driver’s career.

“The biggest eye-opener for me or that I wished I had paid more attention to or had this perspective when I was driving, is how just how much people resonate with a driver’s personality,” Gordon, 47, said.

I think what really drew people to (NASCAR) were these characters and personalities.

“So often as a driver you are caught up in the competition. Everything is about winning or getting a better finish. And you think if I just perform better the sponsors will come, if I perform better then I’ll have more fans or I’ll keep my ride or whatever.

“But there is much more to showing your personality. It doesn’t mean you have to be entertaining all the time, it’s just people want to see the ‘true you.’ They want to get to know you as a person as well as a race car driver.”

Gordon, who will won four championships in the NASCAR Cup Series and will be inducted into the Hall of Fame next month, said many drivers – himself included at one point – tend to be very guarded, preferring not to open themselves to potential criticism.

“I feel like we’ve gotten to the point where there is so much business, there is much money involved in getting a car on the track and getting a team together that the corporate side has made drivers less open to showing us who they really are.”

Gordon said drivers at times embraced the roles fans thrust them into, even when it may not truly represent the type of person they were.

“Even Dale Earnhardt Sr., he wasn’t necessarily a guy that you would say that would play up to a character or play this role, he was not that kind of person,” Gordon said. “But he recognized – in part because he had an incredible fan base that gave him confidence – he could do things to show that side of him and his fans would embrace it for the most part.

“For Darrell (Waltrip), I think it was part of his personality and he had the ability to back it up on the track and he went with it. A lot of people embraced it – not everybody – but it was entertaining.

“It brought a lot to fans. You had people who wanted to see the race but also they couldn’t wait to see his interview after to see if he was mad or happy or this or that; what’s he going to say about what happened on the track?”

Gordon, who amassed his own sizable fan base while marking to a remarkable career that included 93 Cup series wins, said he initially found it difficult to share his personality.

“Later in my career, I started to open up more. Early in my career, I was very much like, ‘I don’t want to get overly analyzed or criticized’ or ‘I just want to say the right thing,’ ” he said.

“Later in life you realize I can still say things to reveal who I am more and not necessarily lose sponsors. It becomes something that has a little bit of an art to it.”