With the first two races for the Sprint Cup championship now completed, it appears that Joe Gibbs Racing is the strongest team.

If Bristol and Atlanta were not indication enough that Joe Gibbs Racing were quietly prepping for a big showing in the chase, than I think Chicagoland and Loudon have quieted any doubt. Matt Kenseth has been in top form winning both Chase races to start and Kyle Busch has been right there with him with back to back runner up finishes.

As I alluded to in my previous article, I thought that Busch and Kenseth needed a great showing at Loudon as that track has both of these drivers have not consistently run well at, especially Kenseth. Kenseth was just as surprised as I was that he ran strong enough to win the race and it proves just how the cars he is piloting are of top notch quality. If he were at Roush, I would have completely doubted his ability to win this race. 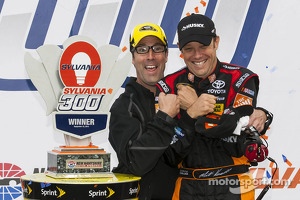 Joe Gibbs Chase drivers have both won twice at Dover and had a very strong showing in the spring race. Kenseth led 29 laps before his engine let loose and Kyle Busch finished 3rd after leading 150 of the 400 laps. The top 3 drivers in points, Kenseth, Busch and Johnson have all historically been front runners at the Monster Mile and I see no reason for that trend to stop this weekend.

Engine issues are an unfortunate part of this sport and that is the major concern for JGR and TRD. Kenseth looks poised to add his second title, but everyone who has watched racing this year is well aware of Toyota’s engine issues. It appears as if they have solved their engine issues and have put out cars that have been the best of the best. Kenseth will need to get that engine intact this weekend if he plans on going 3 for 3 in Chase races this year in the win column.

In some instances, attitude goes along way. Kenseth has been discouraged in years past with Roush Fenway Racing and the equipment that they had to offer. Even though Kenseth was never very vocal about it, one can tell by the ups and downs in his career that the equipment was never there. Every time Kenseth has been interviewed, viewers see a man who takes nothing for granted and appreciates the opportunity he has been given. 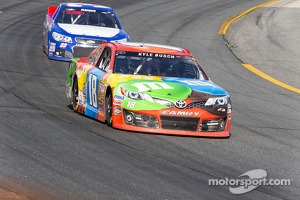 This good attitude may be the different from Matt Kenseth winning the title, over his teammate Kyle Busch, who seems to be a little bitter that he hasn’t been able to top Kenseth in these first two chase races. Especially at Loudon where Busch claimed: “We were never as fast this weekend as the 20 [Kenseth] was,” he said. “They just had a special car. Sometimes you unload and [the car] is just phenomenal. They had that here this weekend (Autoweek.com)”. Kyle Busch has yet to show that he has the mental toughness to win a championship and if he thinks that his teammate is getting preferential treatment from Joe Gibbs, he better think again.

The question on everyone’s minds should be how is it that a driver, who is 41 years old and technically in the wind down part of his career, has an absolute career renaissance? Since 2003, Kenseth has been the quiet, stealth like driver who never made much noise but a few times a year. Now, we cannot escape his name as he has won ¼ of the races run this year and is making a strong case for a Sprint Cup Championship. Joe Gibbs struck gold and knew if he put championship caliber cars beneath Matt Kenseth that he would have the perfect combination.