Denny Hamlin has suggested that Toyota and Chevrolet teams may work together to combat the Fords in today’s Daytona 500. 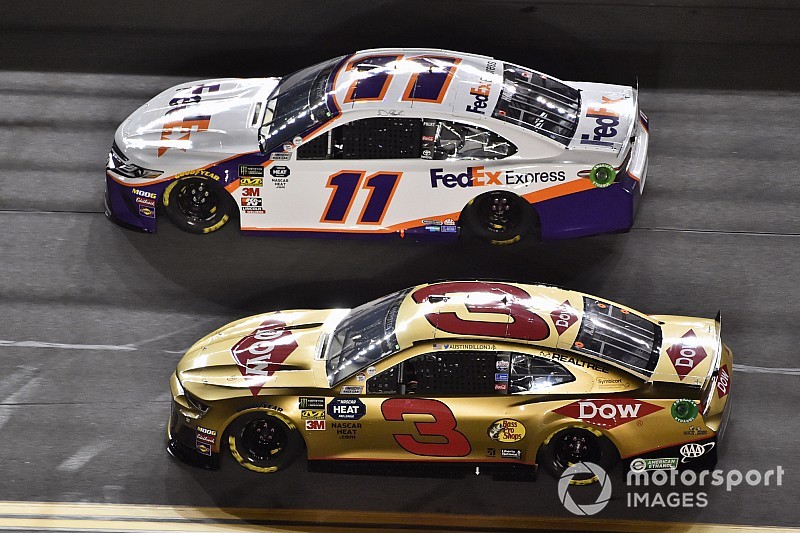 “The downside is when you come to races like these where you have drafting and things like that, you’re outnumbered so you’re facing up against 12 Fords, 12 Chevrolets and you’ve got just a handful of Toyotas.

“Not to give away too much but I think today we’re going to catch some people by surprise and perhaps link up with a manufacturer and gang up on another manufacturer.”

When asked if that would mean help from Chevrolet, Hamlin replied “Maybe, maybe…”

Hamlin addressed the worries over the nature of the single-file racing that’s been seen thus far at Daytona this year and said it was not a result of the current rules package.

“They’re watching too much TV and thinking that’s the way they should do it,” he smiled.

“It’s just they realize racing early in the race and being aggressive and running two- or three-wide on Lap 3 doesn’t get them to the finish. You’re trying to get to Lap 60 for the first stage, Lap 120 for the second, and trying to get to 200 for the end.

“All that in between, you can move up and forward so quickly that people just realized that this [the high line] is the safest place to be. Even if you’re in eighth place, you think, ‘I can win from here as long as I’m not tore up,’ so people are just being more and more conservative to try and get to the end.”

Hamlin explained that his race in the Duel earlier in the week, when he was diving to the bottom line was simply his efforts to investigate various scenarios.

“I was just trying to learn that if I do get back in that ‘top train’, how do I get a run and then get back in line. You constantly want to pick cars off one by one. If no one’s going to help you, you need to figure out how you can drag that car in front of you back, get beside him and then pull up in front of him before that hole closes.

“So I was just learning how much of a run you need to get, how close to the side of him do I need to get to pull him back. Information that I’ll use today.”

Hamlin says that the primary difference between the Daytona 500 now compared with when he started is the nature and behavior of the drivers.

“The drivers are smarter – that’s the biggest thing I’ve noticed,” he replied. “It’s just like any other sport: they start younger and they have more information, so the competition gets better and better all the time.

“Any kinda gap in information that somebody finds something in, it spreads through the garage so quickly. Like I say, it’s just like any other sport where it’s hard to find an edge. If you find something really small, you can exploit it.

“Any one of the top 20 drivers now could win the race from 15 years ago, easily, simply because they know so much more. They know every inch of the car and where to place themselves to be in optimal air. You just have to do it and be smarter than the rest of them. Half of it is mental, half of it is the physical side.”