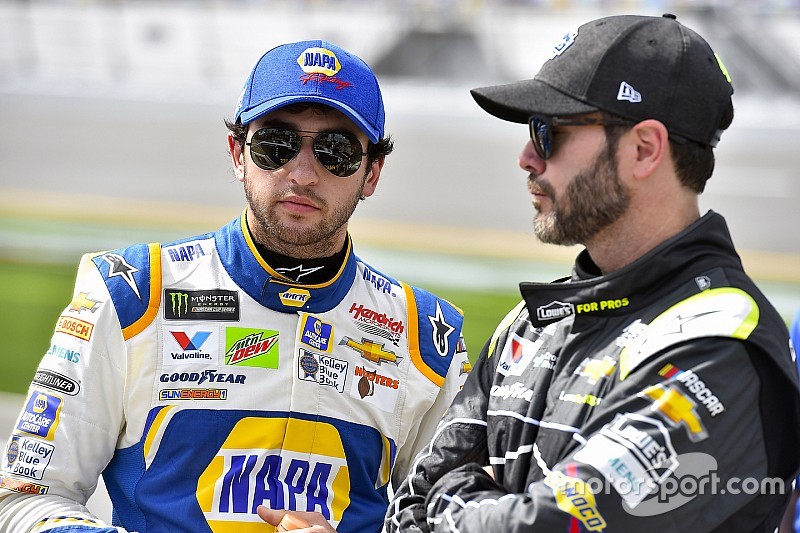 Elliott’s No. 9 Chevrolet had run out of fuel shortly after capturing the victory Sunday at Watkins Glen (N.Y.) International and came to a rest on the track.

Who better to come to Elliott’s rescue than his Hendrick Motorsports teammate and seven-time Cup series champion, Jimmie Johnson, who pulled his No. 48 Chevy in behind Elliott and gave him a push to Victory Lane.

The scene seemed symbolic of a changing of the guard in NASCAR.

But it was more than that.

Johnson, 42, has also played an instrumental role in helping the 22-year-old Elliott deal with enormous expectations that have followed him in his career and the difficulties of coming up empty in the win column during his first two-and-a-half seasons as a Cup driver.

“Jimmie has been one of my heroes for a long, long time. I leaned on him a lot over this past offseason and I always lean on him, but certainly a lot throughout this offseason just about the opportunities I’ve had in the past and not closing them out,” Elliott said in Victory Lane.

“He has been a big supporter of mine and that was one of the coolest things ever and I will never forget it.”

Later, Elliott expounded on his time spent with Johnson.

“He and I were out in Colorado at the same time last year and I had an opportunity to sit down with him and just talk about some of those disappointing days. When you have a chance to talk to somebody like him about those days, that's certainly a character-building moment,” Elliott said.

“They weren’t over a lot of drinks, but they were still very meaningful and helpful to me. When you have not only a fellow racer but a teammate and a guy who’s done what he’s done take the time to lend me advice or just listen to what I had to say, that helps a lot.

“I just appreciate his friendship, and looking forward to racing with him for hopefully years to come.”