In a career that is already Hall of Fame worthy, Jimmie Johnson is set for another first. 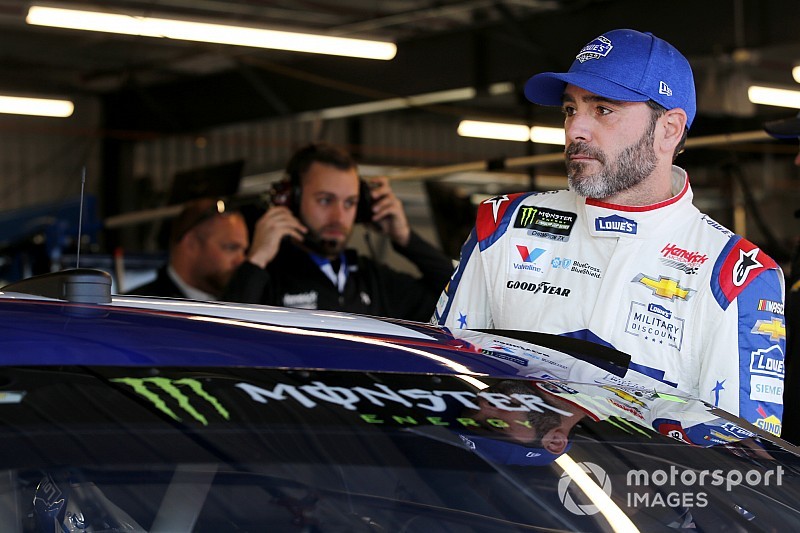 After 17 seasons and seven Monster Energy NASCAR Cup Series championships working with crew chief Chad Knaus, Johnson will begin the 2019 season with a new voice in his helmet.

Knaus has moved to Hendrick Motorsports’ No. 24 team, where he will serve as crew chief for driver William Byron. Johnson begins work with Kevin Meendering, just the second crew chief he’ll had during his fulltime career.

Johnson, 43, may not necessarily be starting over, but the circumstances are definitely new.

“I’ve never been in this position, I know that much,” Johnson said during a media event on the Hendrick Motorsports campus on Tuesday. “There is a lot of ‘new’ to it, there’s no way around that.

“But, I do have the history of knowing everybody here at the shop and the history of the No. 48 and all that, so it doesn’t feel totally new, but largely new, for sure.”

Johnson called the upcoming season a “new challenge,” but one that he welcomes.

“One thing that I did know was that the way things were going and where Chad and I ended up, that needed to change,” he said. “It wasn’t bringing the best out of either one of us and we weren’t delivering like we needed to.

“So, I knew that much, for sure, last year. And then I’m just excited to get this fresh start and see where it takes us.”

Johnson has some familiarity with Meendering, who at one time was the lead engineer on Hendrick’s No. 88 team. They have also been working together preparing for this season ever since the announcement last fall of the crew chief change.

“We’ve had some great team kind of hangouts, as well. Nothing overly complicated, but there will be some new faces on the No. 48 you’ll see at the track. So, just some good hang-time, honestly,” Johnson said.

“We’ve stayed in communication multiple times during the week and the progress of cars and builds and ideas and the hiring of some new people; so we’re off to a great start. I haven’t had to start from ground zero in building my relationship with Kevin. That’s been a nice thing.”

The duo will get an early start to the season as Johnson and the No. 48 team will be Hendrick’s representative in next week’s organizational test at Las Vegas Motor Speedway.

“We’re looking forward to Vegas. I wanted to go into the GM simulator prior to Vegas. We literally don’t have the aero channel and the technical side locked down to even use it right now with this package,” he said.

“We can rough it in, but it’s not exactly what it would be so I’m not going to go. Once we do and we get the aero mapping loaded and all that stuff right, then that’s where it will be really useful. So, we’re really excited to have the January test and honestly, it’s the first domino for us to really start validating our tools and get them working.”

Seven championships or not, Johnson is not ready to slow down.

He admits the 2018 season wore on him – it was his first without a victory during his entire fulltime Cup career. And of course, with his age and the influx of younger drivers at Hendrick – and the sport in the general – there were whispers that perhaps his time had past.

“I get to say when I’m done. I can’t wait to win and win often,” he said. “And I think that would be something really nice to say back to all those people that suggested that I was washed-up and done.”

Jamie McMurray to run The Clash at Daytona