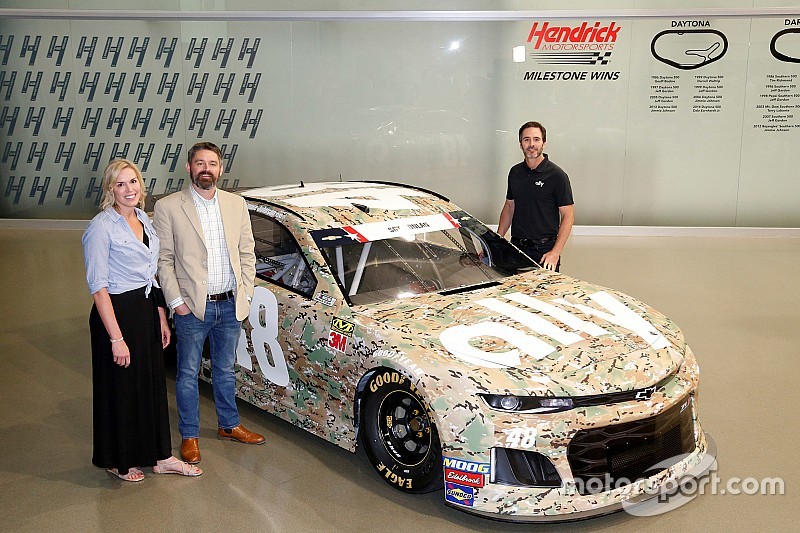 Jimmie Johnson’s No. 48 Ally Chevrolet may be a bit more difficult to see during next weekend’s Coca-Cola 600 events at Charlotte Motor Speedway.

During an event Tuesday at Hendrick Motorsports, Johnson unveiled a military-themed camouflage paint scheme for his No. 48 Chevrolet he will drive in the Memorial Day weekend race.

As part of the NASCAR Salutes initiative to honor fallen soldiers, Johnson’s Chevy will also carry the name of Army Sgt. Richard Donlan, who died in combat in the Vietnam War. Donlan’s nephew, Lanine Donlan, who is also an Ally employee, was on hand to help unveil the car with Johnson.

In addition, Johnson and a group of 50 volunteers from Ally, the USO and the No. 48 team made approximately 1,000 care packages for active service members.

“The NASCAR Salutes program is something I’ve been fortunate to have been a part of many times in my career," Johnson said. “In Ally, I’m very proud to have a sponsor that’s supporting one of their own, and it’s an honor to have Sgt. Richard Donlan’s name on our car.

“It means so much to the families involved, and it’s very cool to make a personal connection with them. Having grandparents who served, I have so much respect and am thankful for our military, both past and present, and for those who have made the ultimate sacrifice for our country.

“It’s a very special weekend all around.”

The Veteran Allys employee resource group, with more 400 members nationwide, was instrumental in identifying a fallen soldier to be honored on Johnson's car as part of the "600 Miles of Remembrance" program during the May 26 NASCAR Cup Series race.

“Our volunteer effort today is part of Ally's long-standing dedication to show service members how deeply we value them and to honor those who made the ultimate sacrifice to protect our freedoms,” said Nicole Fitz, the group’s chair.

Several members of the Donlan family will be honored during the Memorial Day weekend race, including Rick’s brother Jay, a Navy veteran; Jay’s wife Mary, who served in Vietnam as an Army nurse; and Jay’s son Laine, who nominated his uncle for the NASCAR Salutes tribute, and his family.

Alex Bowman second again at Kansas: 'This one hurts'

Get to know the eNASCAR Heat Pro League RCR drivers