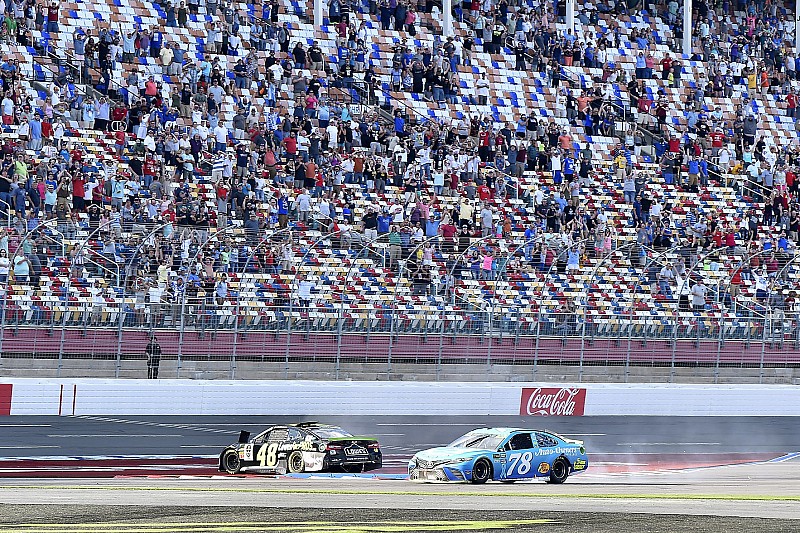 Jimmie Johnson’s playoff future was on the line but it was the win that he was thinking about the most.

Immersed in a career-worst 51-race winless streak in the Monster Energy NASCAR Cup Series, Johnson found himself on the rear bumper of leader Martin Truex Jr. on the final lap of Sunday’s Bank of America 400.

As the two entered the frontstretch, it was clear Johnson was going to attempt a pass. Instead, he locked up his brakes and started spinning and ended up spinning into Truex even as Truex tried to avoid him.

Ryan Blaney cleared both of them to take the inaugural win on Charlotte Motor Speedway’s Roval course but Johnson lost something more than the win.

His eighth-place finish left him tied for the final transfer spot in the playoffs, which he lost to Aric Almirola in a tiebreaker.

“I just locked up the rears and couldn’t control my car and spun. I didn’t think that I initially got into him, but clearly, I did and spun him around,” Johnson said. “Took myself out of a shot at the championship and obviously affected their day which I feel bad about.

“I wish I wouldn’t have been so focused on a race win and I could have transferred and kept my championship hopes alive, but we had such a good car.

“It was just one of those split-second decisions to race for the win instead of for the points and it bit me.”

Johnson said he was very aware of his points situation at the end of the race, but didn’t want to pass up at what looked like a good chance for a victory.

“I knew where I was on the math.  I didn’t think that I was going to crash or spin trying to overtake him like I did,” he said. “I thought I was making a calculated move and giving myself the chance to win and unfortunately it didn’t turn out that way.

“I was just going for the win. Wins are so important. And the veteran could have taken a safe route and didn’t, and unfortunately took us out of the playoffs and took out (Truex).”

Truex expressed his displeasure on the cool-down lap after the race, spinning out Johnson’s No. 48 Chevrolet after both finally crossed the finish line and entered Turn 1.

Austin Dillon the first playoff driver out in "crazy race"