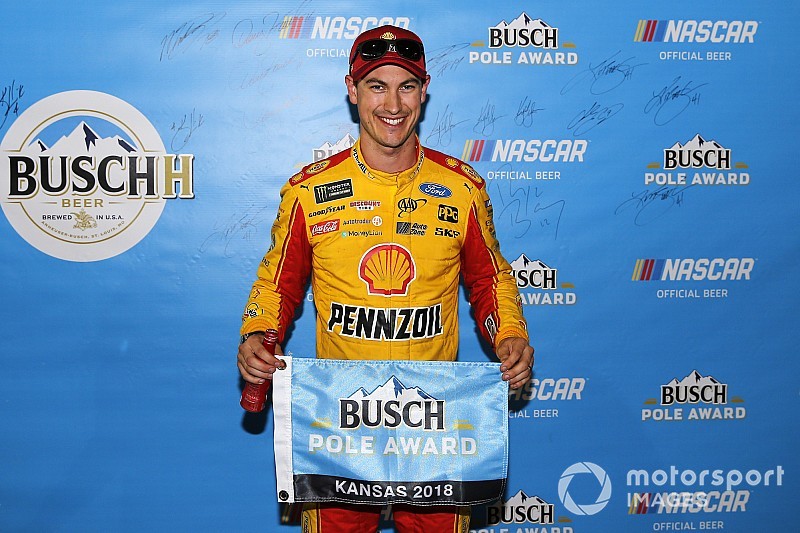 Joey Logano led a train of five Fords at the top of the time sheets in qualifying for Sunday's NASCAR Cup race at Kansas Speedway.

"They did a great job preparing this Ford," he said afterwards. "It unloaded with good speed ... did a good job maintaining the speed we needed throughout the run. This is a fun race to qualify because it definitely rewards bigger guts. The more you go for it the more the reward is, but the penalty is pretty big too.

"It feels nice to to be able to break through and start in a good spot for this final race of the cutoff."

Kevin Harvick qualified on the outside of the front row, just 0.069 seconds off the pole. Aric Almirola was third, Ryan Blaney fourth and Brad Keselowski fifth.

Ty Dillon was the first driver out in the opening round but with the sun going down and temperatures cooling, he was quickly dropped down the order.

Trevor Bayne ended up on the bubble in the closing moments with A.J. Allmendinger the first driver out. Both Regan Smith and David Ragan made attempts, but failed to break their way into the Top 24.

Kyle Larson, who was in a backup car after crashing in practice, made a last-ditch effort to advance but ran out of time just before starting his flying lap. He qualified 27th, but will start from the rear due to going to a backup car.

In the second round, the series' most recent winner Almirola led the way in a train of Ford drivers. But at the bottom of the Top 12, Denny Hamlin narrowly held on to the final transfer spot with Chase Elliott being the first driver on the outside, missing out by just 0.009 seconds.

"We need to go look at it and see," said Elliott, who is already locked into the next round of the playoffs. "Not very good, very disappointed with that. Thought our car drove pretty decent this afternoon so I was excited about tonight and yeah, just couldn't get going there."