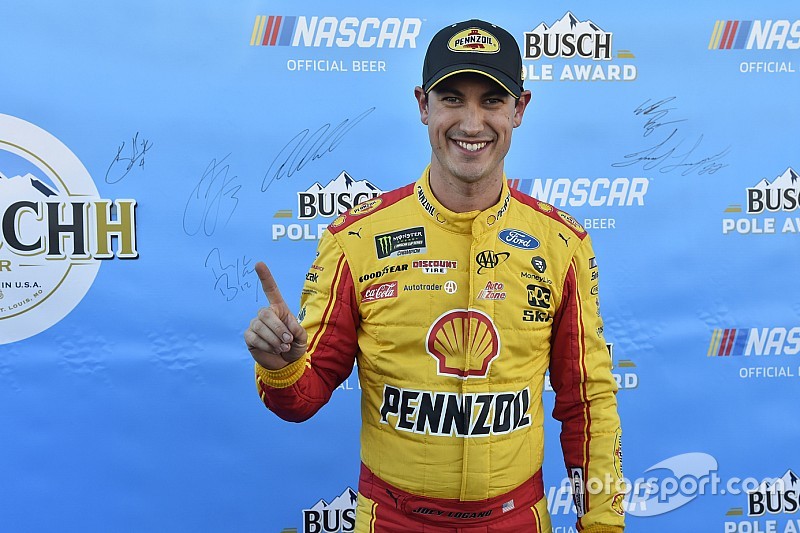 Joey Logano saved his tires and the reward was the pole for Sunday’s race at Martinsville (Va.) Speedway.

Logano was only sixth-fastest in Round 2 but only ran one lap, giving him more fresh rubber in the final five-minute round than most of his competitors.

He went out late in the session, ran four laps, and picked up the pole for Sunday’s STP 500 with an average lap speed of 97.830 mph.

The pole is first of the 2019 season, 21st of his Monster Energy NASCAR Cup Series career and fifth at Martinsville, all coming in his last nine races.

“You just have to be so precise and you’re pushing yourself so hard in the corners and a mistake has such a big penalty when you get loose and then you’re right on the edge of the tires and you go over the edge a little bit,” said Logano, who won last fall’s race at Martinsville following a bump-and-run of Martin Truex Jr.

“It’s the difference between qualifying first and eighth or ninth because the field is so close. It’s awesome to get another pole and hopefully we can top it off with another win. This is a fun race. I always look forward to coming up here.”

Asked about the importance of the No. 1 pit stall selection, Logano said: “It’s so important because pit road here is so dangerous. You look at how small it is, it’s tight getting in and out.

“With everyone pulling out two or three (cars) deep, it’s nice to have nice pit stall and be able to have a safer exit.”

Hamlin remained fast in the second round, again topping the leaderboard with an average lap speed of 97.683 mph.

He was followed closely by Harvick (97.492 mph) and Almirola (97.462 mph). Elliott was fourth and Larson completed the top-five.

Also advancing to the final round were Logano, Keselowski, Suarez, Truex, Johnson, Byron and Bowyer.

Among those who failed to advance were Kyle Busch, who ran eight laps in the 10-minute session; Alex Bowman; Ryan Blaney; Erik Jones, who ran 10 laps in the session; Kurt Busch; and Ryan Newman.

“Just too loose. Trying to make a turn in race trim and we’re just too loose right now,” Kyle Busch said. “That’s all there is to it.”

Hamlin led the way in the first round of knockout qualifying with an average lap speed of 97.835 mph.

He was followed closely by Keselowski (97.457 mph) and Almirola (97.457 mph). Harvick and Larson completed the top-five.

Rounding out the Top 10 were Logano, Preece, Blaney, Kurt Busch and Byron.

Most of field didn’t begin an attempt at a clean qualifying lap until halfway through the 10-minute session. Several drivers did go out to scuff their tires and immediately return.

One of Ricky Stenhouse Jr.’s runs was disallowed after being penalized for speeding on pit road following his qualifying lap. He did manage to get another run in but ended up only 25th fastest.

“They second time out we were just too tight,” Stenhouse said.

Among those who failed to advance were Stenhouse, Bubba Wallace, Daniel Hemric and Austin Dillon.

Corey LaJoie and Cody Ware both failed to participate in qualifying as each was involved in an accident in practice earlier Saturday and both of their teams were working on their respective backup cars.

Off to his best start, Aric Almirola now ready to “challenge for wins”