Johnson and Truex crash; Blaney wins in wild finish at the Roval 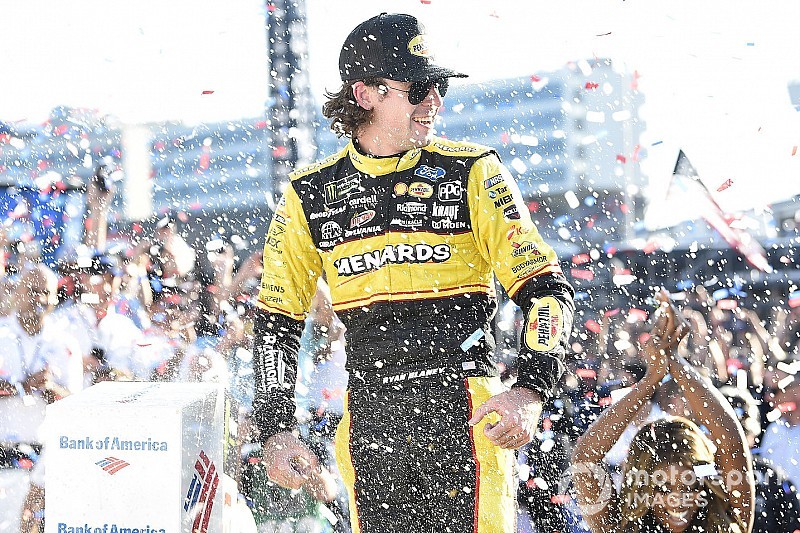 The first NASCAR Cup Series race on the Charlotte Motor Speedway Roval produced a dramatic finish with a first-time winner this season.

Jimmie Johnson closed in on Martin Truex Jr. in the frontstretch chicane on the final lap in an attempt to pass for the lead but spun and in his spinout collected Truex.

That allowed Blaney to navigate through the mess and take the checkered flag in Sunday’s Bank of America 400, his first series win of the season and second of his career.

“Tough weekend, just kind of avoided some stuff,” Blaney said after he climbed from his car. “You hate to see two guys get into it there and take out two of the best cars all day. But that’s racing sometimes.

Asked about the circumstances surrounding the win, Blaney said, "It’s a different way than I’ve ever won one before in my life. I’ve never been running third and two guys wreck and won.  I’ve never had that happen to me before, but it is neat.

"It’s cool to win the first one. Your name will be on it for a while, so that is special. It’s just a really cool day, a kind of unexpected ending to the day and it left us happy, so I’m sure there will be times when the tables are turned on me and I’m leading and me and second wreck each other and third wins because it all comes full circle in this deal, but it happened to work out for us today.”

Blaney’s win locks him into the second round of the Cup playoffs.

Following the break between Stages 2 and 3, Kyle Larson elected not to pit and reclaimed the lead when the final stage went green on Lap 55. He was followed by Daniel Hemric, Kyle Busch and Kevin Harvick.

Kyle Busch moved quickly into the second position as the field entered Turn 1 on the restart and McMurray moved into third.

A caution was displayed on Lap 58 for debris off the car of Austin Dillon, who hit the outside wall in oval track Turn 3. On the restart on Lap 62, Larson continued to lead followed by Kyle Busch and McMurray.

On the restart, A.J. Allmendinger got into Hamlin as cars went four-wide into Turn 1 and Allmendinger was left with a serious tire rub on his No. 47 Chevrolet.

On Lap 65, Austin Dillon appeared to blow a tire and again hit the oval track wall hard which left a trail of debris that brought out another caution.

Several teams elected to pit during the caution but Larson remained on the track and continued to lead on the restart on Lap 68 followed by Kyle Busch, McMurray and Harvick.

On Lap 69, Aric Almirola and Chris Buescher both got off course in separate incidents, which caused another caution.

Most of the field elected to pit but Ricky Stenhouse Jr. stayed out and took over the lead on the restart on Lap 72. He was followed by Paul Menard, Erik Jones and Brad Keselowski.

Daniel Saurez and Jones made contact on the restart, leaving Jones with a flat tire.

Stenhouse went off course near Turn 6 on Lap 73, which allowed Menard to inherit the lead in the race for the first time. Keselowski moved to second and Larson up to third.

Keselowski went outside and around Menard on Lap 75 for the lead in oval track Turn 3 as Larson continued to close in third.

With 29 laps remaining, Larson moved into the runner-up position behind Keselowski and Menard dropped to third.

On Lap 84, Larson grabbed the lead through Turn 1 but he and Keselowski then ran side-by-side through several more turns before Keselowski emerged out of the infield course with the lead again in Turn 8.

With 20 laps remaining in the race, Keselowski continued to hold a small advantage over Larson. Kyle Busch was third, Truex fourth and Johnson moved up into fifth.

Keselowski still held a small lead over Larson with 15 laps left as Kyle Busch remained close behind in third.

With 10 laps left in the race, several of the contenders were close on fuel and trying to save. Keselowski remained ahead of Larson by nearly one second followed by Truex and Kyle Busch.

On Lap 102, Stenhouse slammed into the Turn 1 barrier, doing extensive damage to the right-side of his No. 17 Ford. A handful of playoff contenders elected to pit but Keselowski did not and held the lead on the restart with six to go.

On the restart, Keselowski appeared to lock his brakes going into Turn 1 and slammed nose-first into the wall, which also collected several others, including Larson, Kyle Busch, Blaney, William Byron and Paul Menard. NASCAR immediately threw the red flag to clean the track of debris.

“We just all went down in Turn 1 and went straight. I just locked it up, I didn’t feel like I went in too hard but the video doesn't lie,” Keselowski said after a visit to the care center. “I don’t know if I just overcooked it or what, but that’s what it looks like.”

The race returned to green with three laps remaining with Truex out front, followed by Johnson, Chase Elliott and McMurray.

Austin Dillon the first playoff driver out in "crazy race"