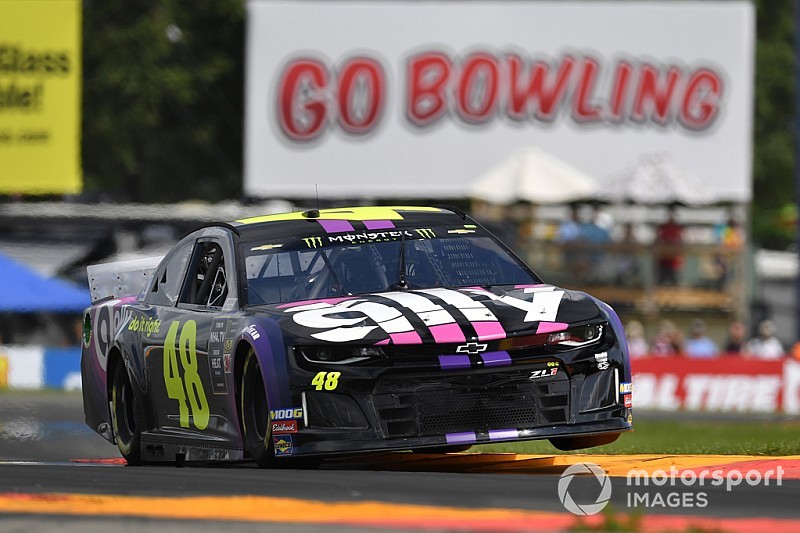 Jimmie Johnson was fuming after Sunday's race at Watkins Glen (N.Y.) International despite making up ground in the playoffs.

Johnson, who finished 19th, aimed his frustrations at Ryan Blaney after the two had contact during the final stage of the race.

"Yeah he just drove through me in the Carousel over there," said Johnson. "I was trying to hear what he had to say but his lips were quivering so bad and he can't even speak. I guess he's nervous or scared or both. I don't know what the hell the problem is. He just drove through me, spun us out and clearly that has big implications on what we're trying to do for the playoffs right now. Clearly not happy with his actions there."

But it wasn't all negative for Johnson who is now tied for the final spot inside the playoffs along with Ryan Newman. In his first race with new crew chief Cliff Daniels, he scored points in both stages, helping to limit the damage of placing 19th in the end.

He also appeared to send a warning to the Team Penske driver.

"Scored points in both stages there which was nice. Setting up for a top-ten, top-eight run and yeah just got drove through. So he claims it was racing -- I can't wait to go racing, everybody stay tuned."

Blaney defended himself, again claiming it was just a racing deal and had no intention to spin him.

“It was just racing," he explained. "He had old tires. They just did gas only and he was pretty slow and I passed 10 guys off the bus stop all day. He hit the third curb pretty bad and got in that position and he was up and I had a good run. I was there. He left probably a lane-and-a-quarter or so, and I took it.  At first he didn’t turn down like I thought he knew I was there, and then he kept coming. I tried to check up and it was just too late. I mean, obviously, I didn’t mean to spin him out. I don’t want to do that. It’s obviously an accident, but he was upset and I can’t blame him for being upset about it.

"We’re just racing hard and I thought there was a lane there and it just closed.”

Truex: "Wish we could have been just a tiny bit better"