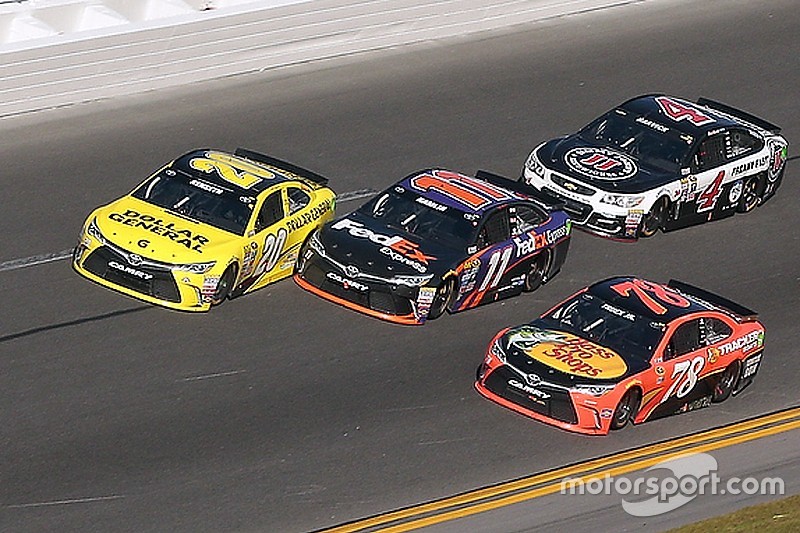 While everyone focused on Martin Truex Jr.'s brush with Daytona 500 glory, Matt Kenseth pulled down pit road in 14th, left to second-guess everything he did on the final lap.

As the field roared off into Turn 3, Kenseth held station at the front of the field. With a push from Kevin Harvick, his teammate Denny Hamlin closed in on the high side.

Hindsight, I probably should have stayed in front of Martin (Truex Jr.) and tried to race him back to the line

In a desperate attempt to protect the lead, the two-time Daytona 500 champion darted up the track, causing Hamlin to shoot to the inside and contact was made.

"I was thinking the worst," said team owner Joe Gibbs.

No wreck took place (surprisingly), but Kenseth slipped back through the field as the pack raced towards the checkered flag, failing to even get a top ten as consolation after leading 40 laps (FINISH VIDEO).

“(The) 11 had a big run,” said Kenseth after the checkered flag, who acknowledged he blocked his teammate. “I should’ve stayed at the bottom. He got in my left rear and turned me sideways. It pretty much sucked."

"I didn't think the outside was going to be able to do it to be honest with you," he later added.

“There’s a million things you could do differently, but I did what I thought I should do at the time to try to win. We finished terrible, but that was the move I thought I had to make to try to preserve the win. He (Denny Hamlin) had such a big run, he was going to go right around me in my opinion anyway and turn four was treacherous on the bottom.

"I didn’t think we were in a good spot to try to win it with his run, so I was trying to get in front of him. Unfortunately, his run happened pretty late in the straightway and he had the whole width of the corner to make a move and he was able to cross back over and get under me.”

The decision to leave the bottom

In the post-race press conference, Hamlin admitted that he believes Kenseth would have won if he stuck to the bottom, but stopped himself during his explanation: "I don't want to see anything because I don't want him to feel any worse than he already does."

"Hindsight, I probably should have stayed in front of Martin (Truex Jr.) and tried to race him back to the line, but it looked like he was going so fast I could get in front of him and get a little boost and I just couldn’t," said Kenseth, echoing Hamlin's later comments.

Coach Joe Gibbs went to console Matt on pit road, telling Motorsport.com that he just wanted to listen and be there for him. "It's extremely hard," he said of dealing with the varying emotions of his drivers.

"If I can’t win, I want my teammate to win. That’s what being teammates is all about is to get everybody at Joe Gibbs Racing running good and we did that today. Those guys got the finish. I didn’t unfortunately.”