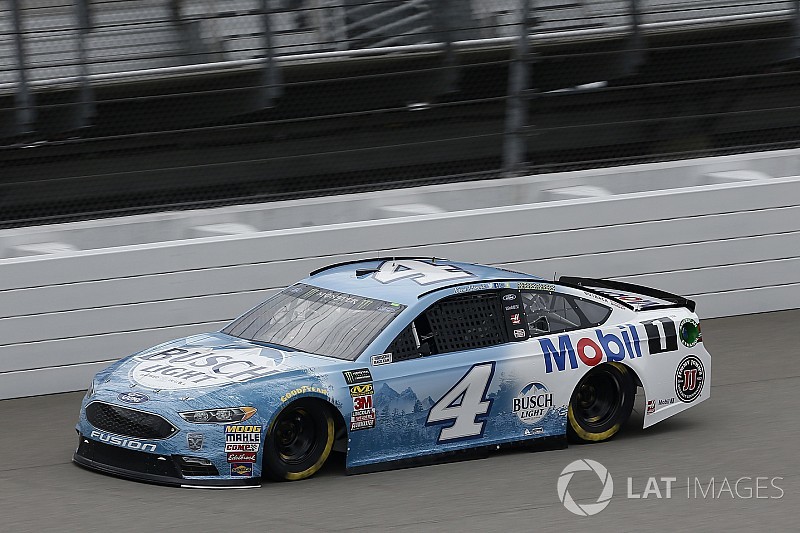 Once he got the lead, Kevin Harvick cruised to the Stage 1 win at Michigan International Speedway.

Hamlin, the pole winner, took command early in the race while keeping a small advantage over Kyle Busch.

While running in the seventh position, Erik Jones spun off Turn 4 on Lap 8 to bring out the first caution. His No. 20 Toyota went through a ride through some of the infield grass. He did not appear to do much damage to his car.

“I touched that seam in (Turns) 3 and 4 and there was nothing I could do,” Jones said over his radio.

The race returned to green on Lap 14 with Hamlin still leading the way followed by Kyle Busch and Harvick.

On Lap 16, Truex and William Byron made contact in Turn 1, which sent both cars spinning and Byron’s No. 24 Chevrolet ended up backing it into the wall. Jones returned to the lead lap under the caution.

On the restart on Lap 20, Kyle Busch led the way followed by Harvick and Bowman moving quickly into the third position.

NASCAR’s mandated competition caution was displayed on Lap 26. All cars pit for tire and fuel to make it to the end of the stage with Kyle Busch the first off pit road and in the lead when the race restarted with 30 laps left in the stage. He was followed by Harvick and Hamlin.

Chase Elliott received a penalty for an uncontrolled tire on pit road and had to restart the race from the rear of the field.

On Lap 31, Harvick moved around Busch to take the lead for the first time as Blaney moved into the third position.

On Lap 37, Kyle Larson pit under green to change tires for a possible loose wheel. Elliott pit one lap later for the same reason.

With 20 laps remaining in the stage, Harvick haad moved out to a more than two second lead over Kyle Busch as Blaney remained in third.

With 10 to go, Harvick’s lead over Kyle Busch had grown to over 3.5 seconds.

Before the race got underway, Joey Logano was forced to pit as his team changed the left-front shock on his No. 22 Ford. He rejoined the field at the rear of the field.

Three cars had to start the race from the rear of the field – David Ragan and Blake Jones for changing transmissions and Ross Chastain for a driver change (Reed Sorenson qualified and practiced his car this weekend).

Harvick wins Stage 2 at Michigan; Truex runs out of fuel