Kevin Harvick fends off Blaney in overtime to win at Texas 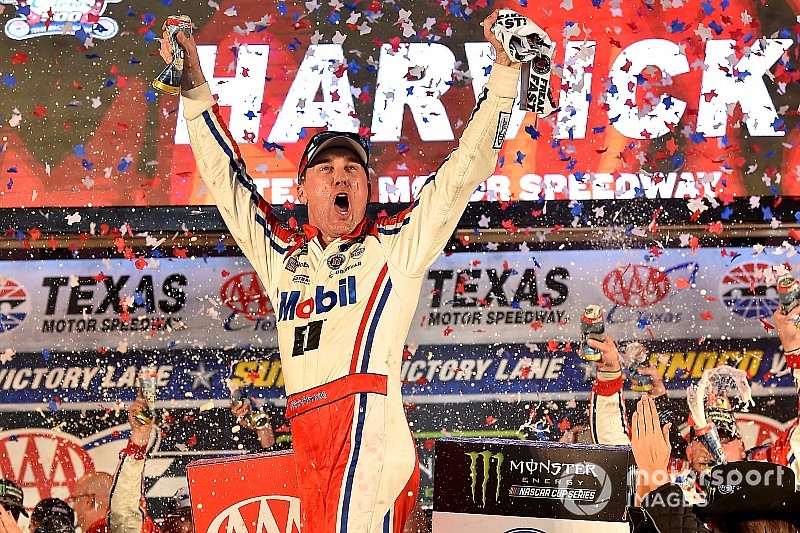 Kevin Harvick saved his eighth NASCAR Cup Series win of the season for the Round of 8 which earns him a trip to the final four.

Harvick held off Ryan Blaney in a two-lap overtime to the win Sunday’s AAA 500 at Texas Motor Speedway, repeating his victory in this race of a year ago.

The win is Harvick’s eighth this season and 45th of his career.

Harvick will now join Joey Logano as two of the four drivers who will compete for the 2018 series championship at Homestead-Miami Speedway in two weeks.

"I'm just really, really proud of everyone at Stewart-Haas Racing for these cars that we've had for really five year now," Harvick said. "I'm just have to thank everyone who helps us, really eveybody at the shop.

"We've been working day after day to make speed. This place has been really good to me. We finally knocked that barrier (win) down (last fall) and win in front of all these fans at Texas. So, thank you guys!

"The expectations are to win. Like I told you guys before the race, we don't race for points, we race for wins. We don't count our fingers and or toes trying to figure out how to make it in. Today we earned our way in and we're going to race again next week and try to win another race and then see what we can do at Homestead."

This is also the fourth time in five seasons Harvick will be competing for a championship under the current playoff format.

Following the break between Stages 2 and 3, Logano was the first off pit road thanks to a two-tire pit stop and held the lead when the final stage went green on Lap 177.

Brad Keselowski quickly powered around Logano and into the lead shortly after the restart.

With 150 laps to go in the race, Keselowski held a small lead over Blaney with Logano running in third.

Daniel Suarez went around off Turn 2 on Lap 226 to bring out a caution and set up a round of pit stops. Logano was the first off pit road and took over the lead on the restart on Lap 231. He was followed by Blaney and Keselowski.

Jimmie Johnson had to restart from the rear of the field after his tire changer went over the wall too soon.

With 90 laps to go, Harvick had moved up into the second position and began running down Logano in an attempt to make a pass for the lead.

On Lap 248, Truex was forced to pit under green after complaining of a loose wheel. He was running seventh at the time.

To make matters worse, Truex was penalized for driving through too many pit boxes and was forced to make a pass-thru penalty. After serving the penalty, Truex was running 26th and two laps down.

On Lap 254, Harvick made his way around Logano and back into the lead.

Harvick’s had moved out to a more than 2.4-second lead over Blaney with 65 laps to go as Logano ran in third, followed by Almirola and Kurt Busch.

On Lap 282, Harvick hit pit road under green for what would be his final stop for fuel. Several other drivers followed suit.

Once the cycle of stops was completed on Lap 294, Harvick emerged with a more than 4-second lead over Blaney, followed by Almirola, Logano and Jones.

David Starr spun off Turn 2 to bring out another caution. The top six in the running order elected not to pit so Harvick remained out front when the race returned to green with 32 laps remaining.

Caution was displayed again with 28 laps remaining as Darrell Wallace Jr. got into Chris Buescher, who hit the outside wall, and then Matt DiBenedetto slammed into the back of Buescher.

The race returned to green on Lap 311.

On the restart, Blaney and Harvick raced side-by-side with Blaney grabbing the lead with 22 laps to go as Harvick dropped into second.

With 17 laps to go, Harvick cleared Blaney off Turn 2 to reclaim the lead.

Joey Gase and Daniel Suarez were involved in a wreck with two laps to go which sent the race into overtime. Harvick led the way, followed by Blaney, Larson and Logano.

Almirola to Logano: "If I'm not in (the final four), he'll know it"