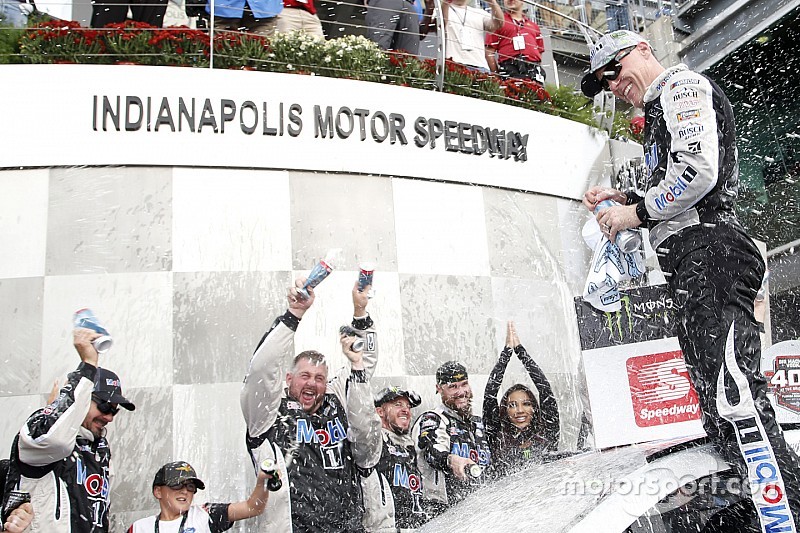 For the second time in his NASCAR Cup Series career, Kevin Harvick has won the Brickyard 400 from the pole.

Harvick out-dueled Joey Logano for a lap on a restart with nine of 160 laps to go and then held on to win his second career Brickyard 400 victory at Indianapolis Motor Speedway.

Just like his win at the Brickyard in 2003, Harvick won the race from the pole.

The win is Harvick’s third in the Monster Energy NASCAR Cup Series this season and 48th of his career.

"This is great. I have to say thanks to all the fans. I can't tell you how much coming to Indianapolis means to me," Harvick said. "As a kid I watched Rick Mears win the Indy 500 and got to be around him as a kid. He was my hero.

"My team built a great race car. I can't say enough about everyone on (this team). They built a heck of a race car. It's the same stuff that we took to Michigan and had a real good weekend there, obviously, and went to Victory Lane.

"I know how much this means to Rodney (Childers, crew chief) and all the guys who work on this car. We've been so close at winning here before."

Following the break between Stages 2 and 3, only a handful of cars elected to pit and Harvick remained in the lead when the race returned to green on Lap 105. He was followed by Larson, Blaney, Logano and Daniel Suarez.

A multi-car wreck erupted after the restart as the field passed through Turn 2 with Jimmie Johnson, Kurt Busch, Daniel Hemric getting the brunt of the damage as the caution was displayed.

Only a handful of cars elected to pit and when the race returned to green on Lap 112, Harvick continued to lead followed by Blaney, Logano, Suarez and Byron.

Blaney got past Harvick off Turn 2 on the restart to take the lead in the race for the first time.

With 40 laps to go in the race, Blaney had moved out to a 1.7-second lead over Harvick with Logano running third, Suarez fourth and Almirola fifth.

On Lap 129, Kyle Larson hit the wall hard coming off Turn 2 to bring out another caution just after Suarez and Harvick had made their green-flag pit stops.

The remainder of the field hit pit road for what could be their final stops of the race with Blaney the first off. On the restart on Lap 135, Harvick (who stayed out) led the way followed by Blaney, Logano, Wallace and Bowman.

On the restart, Bowman spun and wrecked after contact with Hamlin as NASCAR threw the caution once again.

The race returned to green on Lap 140 with Harvick out front followed by Blaney.

With 20 to go, Logano had moved to second behind Harvick as Wallace moved into third.

On Lap 147, Matt Tifft spun in Turn 1 and backed his No. 36 Ford into the wall to bring out the ninth caution of the race.

Most of the lead-lap cars remained on the track and when the race returned to green on Lap 152, Harvick continued to lead followed by Logano, Wallace, Blaney and Hamlin.

Logano battled Harvick side-by-side for nearly a lap before Harvick was able to clear him for the lead through Turn 3.

With five laps remaining, Harvick had extended his lead over Logano to 2.2 seconds as Wallace remained in third.