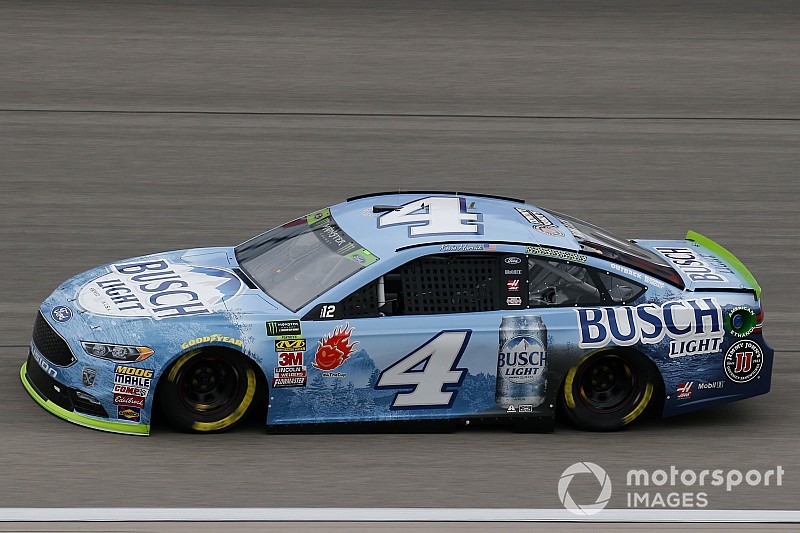 Kevin Harvick got ahead during a round of green-flag pit stops, taking the Stage 2 win at Kansas Speedway.

Logano once again drove off on the restart while Ryan Blaney fought off Kevin Harvick for second. Harvick would launch another attack a few laps into the run, successfully taking the second position. But again, no one could catch the No. 22.

Like the first stage, Martin Truex Jr. kicked off green-flag pit stops. During the round of pit stops, Logano lost track position to both Harvick and Blaney and ended up third when everything cycled through.

Stewart-Haas Racing teammates Aric Almirola and Kurt Busch were both assessed an uncontrolled tire penalty, forcing them both to make an additional trip down pit road. After serving the penalty, Almirola was running 24th, one lap down while Busch was 27th, two laps down. Almirola is already locked into the next round via his win at Talladega, but the penalty could prove costly for Busch as the threat of elimination looms.

After pit stops cycled through, Almirola was back on the lead lap, but Busch was still trapped one lap down.

Paul Menard, who finished fifth in Round 1, had contact on pit road with Trevor Bayne which damaged the right front fender of the Wood Brothers Ford. He later lost multiple laps under green after a tire rub cut down the right front tire.

Brad Keselowski gambled and stretched the run as far as he could, finally pitting with 23 laps to go in the stage. Harvick inherited the lead, roughly two seconds clear of Blaney.