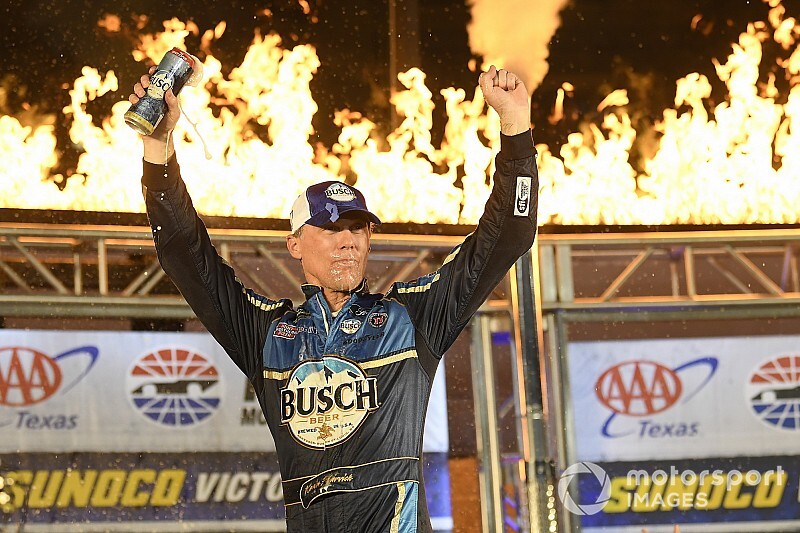 Harvick overcame a pit road penalty and a bad restart to come from behind in the final stage and hold off a pair of his Stewart-Haas Racing teammates for the victory in Sunday’s AAA 500.

On Lap 254 of 334, Harvick passed Almirola to take the lead for the first time in the final stage and remained out front through a round of green-flag pit stops. He held off Almirola off by 1.594 seconds at the finish.

The win is the fourth of the season for Harvick and 49th of his career. It’s also his third consecutive victory in the Texas playoff race.

“I just want to thank all these fans. Texas has always been so great to us, and what a race track the last few years,” Harvick said. “We brought a great (car) to the race track this weekend, but I've got to thank everybody who helps put this car on the race track week-in and week-out, and all those guys in the race shop, Roush Yates Engines for putting this engine in this last week.

“It’s just been a lot of work put into this race. We knew this was a good race track for us. Felt like it fit the styles of our cars, and man, did it.”

Asked if he had the confidence he could win throughout the race, Harvick said: “Well, we got put back in the back there for the pit road violation, and I didn’t really know what was going to happen.

With one race left to qualify, Martin Truex Jr. and Harvick are already locked in the Championship 4.

Following the break between Stages 2 and 3, most everyone pit but William Byron remained on the track and inherited the lead.

On the restart on Lap 178, Byron was followed by Suarez, Jones, Jimmie Johnson and Clint Bowyer.

Coming off Turn 4 on Lap 179, Suarez got around Byron to take the lead for the first time in the race.

Johnson spun and hit the Turn 2 wall on Lap 186 to bring out a caution. His No. 48 Chevrolet suffered serious damage in the incident.

Just a handful of drivers elected to pit, including Harvick, Blaney and Truex. The race returned to green on Lap 191 with Suarez still out front. Harvick had to restart from the rear of the field for his team having equipment over the wall too soon.

Garrett Smithley wrecked in Turn 2 on the restart and collected David Ragan to once again put the race under caution.

The race returned to green on Lap 196 with Suarez out front followed by Byron, Kurt Busch and Almirola.

Almirola went to the inside of Suarez entering Turn 1 on Lap 202 to reclaim the lead as Suarez dropped to second and Kurt Busch ran third.

On Lap 231, Kurt Busch got around Suarez to take the second spot. Harvick had recovered from his penalty to run eighth.

Bubba Wallace spun off Turn 2 with a tire going down on Lap 242 to bring out a caution just as several drivers were beginning a round of green-flag pit stops.

Most everyone pit but Almirola – who had already completed his stop – moved back into the lead on the restart on Lap 249. He was followed by Suarez, Ryan Newman (who was first off pit road) and Kyle Busch.

On Lap 254, Harvick came off Turn 4 and went to the inside of Almirola to take the lead for the first time in the final stage.

With 60 laps remaining in the race, Harvick had expanded his lead to 1.5 seconds over Almirola as Kyle Busch had moved up to third, more than 6 seconds behind the leader.

With 30 laps remaining, many drivers began making their final green-flag pit stop to pick up enough fuel to make it to the finish of the race.

Harvick made his stop on Lap 308, along with several others. When the cycle of stops had completed on Lap 313, Harvick returned to the lead and with a more than 2-second advantage over Almirola.

Kyle Busch, the last of the lead-lap cars to pit, stalled on the exit to his pit stall. He dropped to seventh when he returned to the track.

With five laps remaining, Harvick still managed a more than 2-second lead over Almirola with Suarez in third.

Once a title favorite, Hamlin's championship hopes in doubt