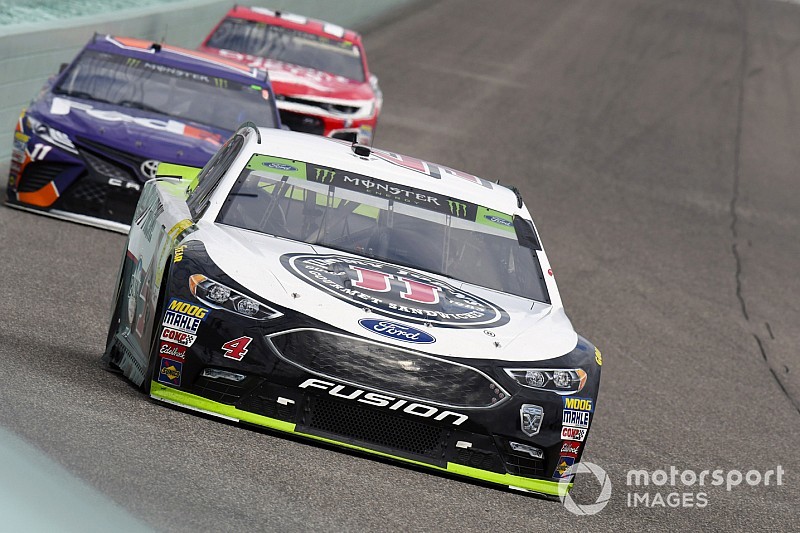 The night time was not the right time for Kevin Harvick at Homestead-Miami Speedway.

During the first two days of practice of the weekend, Harvick was not especially happy with the performance of his No. 4 Stewart-Haas Racing Ford.

When Sunday’s Ford 400 got underway, however, he quickly began to show the performance which had led him to a career-best eight NASCAR Cup Series wins this season.

He won the first stage in dominating fashion and was passed on the final lap by Kyle Larson to end up runner-up in the second stage. But when the sun when down, the handling on his car suffered and he had trouble staying up front running against his fellow title contenders.

“We didn’t make a lot of big changes, we made a lot of small changes, and the car was definitely better (on Sunday),” Harvick said after the race. “But when it got dark, we just lost the rear grip and couldn’t get off the corner and was having trouble turning in the corner.

“Just the balance was really good until it was dark outside, and we just never could get the rear grip back to where we needed to, and I couldn’t take off.”

We had a shot there (until) the caution came out

Still, as the race wound to its conclusion, Harvick found himself with a shot at the race win – and a second series championship.

A final round of green-flag pit stops kicked off with Harvick the first to drop to pit road with 37 of 267 laps remaining. Martin Truex Jr. and Joey Logano soon followed on the next lap.

Kyle Busch, however, remained on the track and inherited the lead.

With Busch still out front, Harvick had moved in position to take the race lead when Busch made his green-flag pit stop. Before Busch was forced to pit, Brad Keselowski got into Daniel Suarez and sent him spinning into the infield and which brought out a caution with 20 to go.

All of the lead-lap cars pit with Kyle Busch first off pit road, followed by Truex, Logano and Harvick. The race returned to green with 15 to go.

Logano – who seemed to have the best short-run car all night – got around Busch and moved by Truex to take the lead with 12 laps left, holding on to claim the win and the championship.

“The (team) put us in a position to win if the caution didn’t come out, and we had a shot there (until) the caution came out,” Harvick said. “We came out last of the four on the pit stop there and then the restart was not our strong suit all night, and just got beat there on a short run.

“We didn’t have track position and they just drove off. It’s just the way it all shook out, (Logano) could take off really good.”