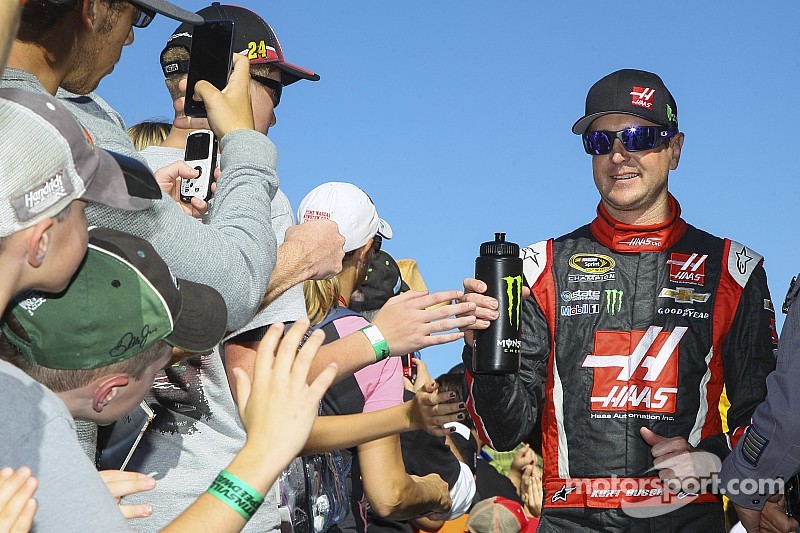 The offseason has been far from relaxing for Kurt Busch.

While most of his contemporaries have been on holiday in the islands or skiing out west, Busch has been dealing with lawyers and giving testimony in a domestic abuse case filed by his ex-girlfriend Patricia Driscoll in Kent County (Del.) Family Court. Although there has not been a ruling on the case, Family Court Commissioner David Jones said on Jan. 13 that he expected a decision on Driscoll's request for a no-contact order to be delivered to both parties in 10 days to two weeks.

On Tuesday, Busch faced another inquisition – on the Charlotte Motor Speedway Media Tour.

My right hand was on the bible and I swore under oath to tell the truth.

“It’s easy to be here and stand on truth,” Busch said when asked about the challenges he’s faced since November. When he was specifically questioned about his comments referring to Ms. Driscoll as a “trained assassin”, the 2004 NASCAR champion simply replied, “My right hand was on the bible and I swore under oath to tell the truth.”

Focused on the task at hand

Busch, who drives the No. 41 Haas Automation Chevy for Stewart-Haas Racing, would not speculate about what might and might not happen after the court’s conclusion has been made.

“We have to wait for a decision from the Dover Police Department and the investigation that is ongoing,” Busch said. “We’ll see how that all turns out.”

A little help from his friends

While awaiting the Delaware attorney general's decision on whether to file charges as a result of Driscoll's accusations of abuse, Busch has been grateful for “all the support I’ve had behind the scenes” whether from his owners, teammates, sponsors or family.

They know the truth. They know who I am.

“It’s nice to understand that everybody goes through bumps in the road and family is the best to lean on,” Busch said. “Family and friends, the teammates at Stewart-Haas Racing and all the individuals that have all been very supportive. It’s nice to know that people can see through and understand the actual specifics and the whole truth to the environment.”

Busch has found solace at the race shop and on a brief hunting trip in Texas with his new crew led by veteran crew chief Tony Gibson earlier this month.

“They know the truth,” Busch said. “They know who I am. Our focus is to race racecars and to be fast when we get to the race track. Not a lot of people on the inside read what’s on the outside.”

I think domestic violence is a serious issue, at the same time I believe in due process.

Team owner Gene Haas has been in Busch’s corner throughout his ordeal. Despite Driscoll’s accounts of alleged bouts of alcoholism and depression, which Busch denies, Haas insists he’s never seen that side of his driver.

“Every time I’ve been with Kurt Busch at dinner, I’ve never seen him drink,” Haas said. “On race weekends when I’m having a beer, he’s not. I never saw that personally. I think he’s a stable person. He’s a fun person to be around.

"Those characterizations I don’t believe are true.”

Haas said the story has evolved into “tabloid form” which is “unfortunate”. He elected to hold comment on specifics of the case or a backup plan for a substitute driver until he hears the final findings of the court. But Haas never discounted the gravity of the situation.

“I think domestic violence is a serious issue, at the same time I believe in due process. I also think there can be abuses to the system.

“The authorities have an opinion about what they’re going to do. I have a feeling it’s going to be something that nobody expects. I don’t know what that means but it could be so many different levels that they can come back at, we have to see what they come back with before we can respond. Other than that, we would just be speculating. We don’t want to do that. It would just add fuel to the fire.”

Busch isn’t waiting for the decision. On Thursday, he leaves for the Caribbean for a respite prior to Speedweeks at Daytona International Speedway.

Not surprisingly, Busch’s demeanor changed when he was asked about racing – whether it was the No. 41 Haas Automation team, returning to Indy in May, testing one of Haas F1’s cars or attempting to race in the Chili Bowl Nationals next year.

“That would be fun to drive the Formula One car,” Busch said. “You’d work through the Ferrari connection and where they have their facility and test track. I’ve been trying to get my hands on any vehicle that moves in the last year and it’s been fun to experience different forms of motorsport.

“Chili Bowl is on the short list, for sure. I enjoyed my time there and if I’m going to make the right next step, I need to get with Cory Kruseman and go out to midget driving school out in Ventura, Cailfornia.”

NASCAR Hall-of-Famer David Pearson is on the mend