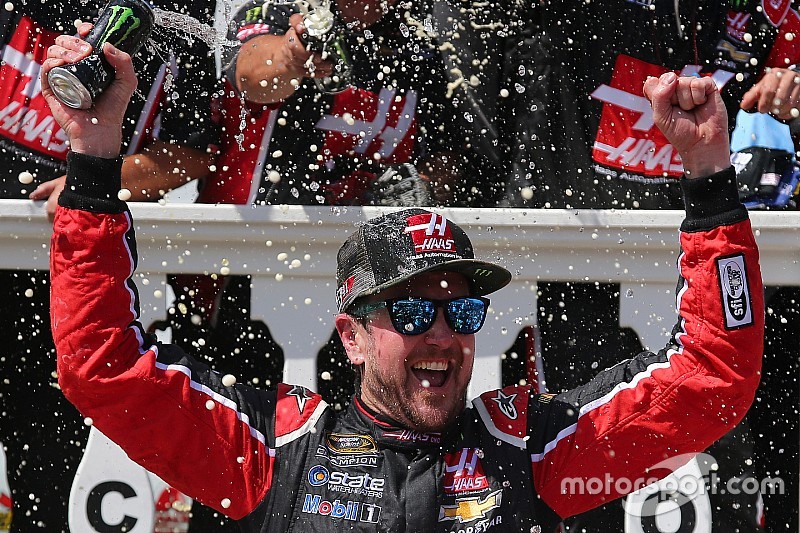 The rain-delayed Axalta 400 was worth the wait for Kurt Busch. After activities were cancelled on Sunday at Pocono Raceway, Busch won the fuel mileage bout this afternoon by 1.127-second over Dale Earnhardt Jr.

From Victory Lane, Busch said, "We just had to balance everything. We had a fast car, a (suspended) crew chief and the way the fuel mileage played out, I didn't know if we would have enough fuel. It's a wonderful win for us. We have been so close all year. It was just a matter of putting it all together - pit crew, engines and everybody who works on these bodies, chassis, you name it. It was so much fun to drive and be competitive and be up front."

Following his fourth runner-up finish of the season, Earnhardt remarked: “It was a good run for us [but] I should have been able to hold off the 41 on that restart. I think if I got ahead of him, he wouldn’t have been able to get by us.”

The first of 10 cautions occurred on Lap 3 when Matt DiBenedetto spun in Turn 3.

"I didn't hit anything, I don't think," said DiBenedetto, who started 27th. "The tires are up – they just all parked in front of me.”

NASCAR issued a competition caution for Lap 15. The race returned to green on Lap 19. Both Kevin Harvick and Kasey Kahne were busted for speeding on the stop and had to drop to the rear of the field. Two laps later, Brian Scott spun in Turn 1. During pit stops, NASCAR penalized the pole-winning No. 2 Team Penske Ford for unapproved adjustments after a crewmen plowed into the left rear fender. Although the team adamantly denied any wrongdoing, the sanctioning body forced Brad Keselowski to return to pit road to repair the modification. After repairs — and serving a drive-thru penalty — Keselowski cycled out to 38th on Lap 29.

Last weekend’s winner and defending Pocono-race victor Martin Truex Jr. also had issues on that stop. Truex, who started 17th, was leaving his pits when DiBenedetto turned into the No. 78 Furniture Row Racing Chevy causing damage to the right front. Truex dropped out of the top 30 but recovered to finish19th.

DiBenedetto was not so lucky. He wrecked again on Lap 59 in Turn 1.

“We had a really rough start to the race,” said DiBenedetto, who was seen and released from the infield care center. “Truex was pulling out of this pit stall and we were coming in and there was some sort of miscommunication there and I feel bad for him. We tore our car up there and tried to fix it — got it to where it was drivable and going into (Turn) one, something broke.”

Matt Kenseth, who led 31 laps, held the point at the restart on Lap 65, but Elliott claimed the lead before the circuit was complete.

With 67 laps remaining, Tony Stewart, who was running in the top 10, got loose and collected Danica Patrick and Landon Cassill in process.

Following a debris caution on Lap 102, Kasey Kahne slid into Ryan Newman, who pushed Kyle Busch into the wall on the second lap (109) following the restart. The incident marked the second time in two weeks the defending Sprint Cup champion was in the garage before the end of the race. Busch was running 10th at the time of the accident. He returned to the race after repairs on Lap 121, but finished 31st, 10 laps off the pace.

Newman claimed after the incident that he never made contact with Busch, but confirmed Kahne slid into the No. 31 Chevy. Kahne and Newman restarted 12th and 14th, respectively.

Four laps later, on Lap 117, Austin Dillon’s brakes failed entering Turn 1 and he crashed after blowing a right front tire. The incidents continued on the Lap 121 restart. After the field completed one lap, Jimmie Johnson went low entering Turn 1 and Casey Mears came down on the No. 48 Chevy. Johnson bounced into the inside wall and was forced to the garage for repairs but not before igniting the 10th and final caution.

Earnhardt assumed the lead, but it was short-lived with Kurt Busch passing the No. 88 Axalta Chevy on Lap 127. The move triggered Earnhardt to plead with his crew, “Help me please.”

With five laps remaining, Johnny Klausmeier, subbing for Tony Gibson, who was suspended due to a lugnut infraction one week earlier at Charlotte, told Busch, “Keep saving. We’ll flip the switch with one to go.”

Busch held the point until the finish for his 28th career win.

NASCAR penalizes Keselowski at Pocono – and it might not stop there