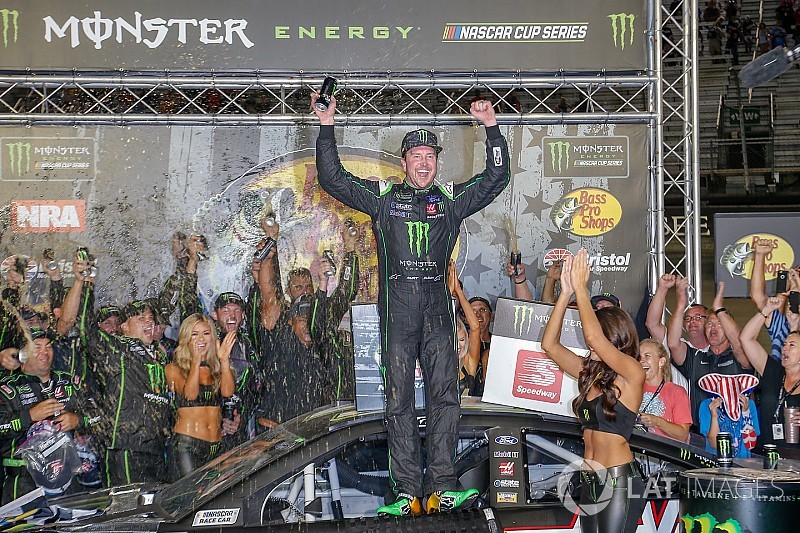 Kurt Busch finally found his way back to Victory Lane and it’s a familiar one.

Busch, who won in five of his first 11 starts at Bristol (Tenn.) Motor Speedway in the Monster Energy NASCAR Cup Series, held off Kyle Larson to win Saturday night’s Bass Pro Shops 500 for his first win of the year.

Busch becomes the third driver at Stewart-Haas Racing to earn a victory this season.

“It’s awesome to do it at Bristol. I love this place. We now have won six times here and I have great teams that have always helped me win," Busch said. "This group of guys, Billy Scott, my crew chief, this is his first win and to be able to do it with Ford and Monster and Haas Automation is just what it’s all about is executing as a team and we had good restarts when we had to, and then you’ve got to get clever and start throwing everything at it."

Asked how he got the lead from Clint Bowyer, Busch said, "It was up to Bowyer to choose the lane. He chose the outside and we got a perfect start on the inside. I dug it perfect right into Turn 1 and 2 and the spotter said, ‘Take it. Take it.’  Which meant go to the wall on exit and I didn’t even bother to look in the mirror.

"He said, ‘Take it,’ and when you trust your team to give you the right stuff setup-wise, you’ve got to trust the spotter the same way. Tony Raines. He’s a racer. That’s why he’s my spotter and it worked out perfect.”

Busch locked in position in the 16-driver playoffs with his win but he said winning is the most important thing.

"It just matters to win. I’m glad we did. We’ve been the most consistent team this year that hasn’t won. I wasn’t worried about not making the playoffs, so we could kind of treat these races coming up as free-for-alls, and we’re just gonna keep going after it."

Following the break between Stages 2 and 3, Logano was the first off pit road and remained in the lead when the final stage went to green on Lap 262. He was followed by Aric Almirola, Larson and Elliott.

Kyle Busch, who at one point fell two laps down for his involvement in an accident on Lap 2, received the free pass and returned to the lead lap during the stage break. Busch restarted the final stage in 19th.

Kasey Kahne had to restart from the rear after receiving a penalty for removing equipment from his pit box.

With 224 laps remaining, Austin Dillon made contact with the wall off Turn 4 but was able to continue on.

Kyle Busch moved into the top 15 with 210 laps left in the race as he slowing made his way back to the front since returning to the lead lap. Kevin Harvick, who lost two laps pitting for a loose wheel, had worked his way into the free pass position.

Elliott finally got around Logano for the lead with 204 laps left after working his rear bumper for several laps. Kurt Busch had moved into third.

With 190 laps to go, Elliott had moved out to a more than two-second lead over Logano as Kurt Busch remained in third.

On Lap 330, Kurt Busch moved into the second position behind Elliott with Bowyer having moved up to third.

With 170 to go, Almirola continued to run in the top five but significant smoke was coming from the back of his No. 10 Ford.

With 165 to go, NASCAR black-flagged Almirola and forced him to pit so his team could address the smoking issue. Almirola finally pit on Lap 340.

Kyle Busch had made his way up to ninth with 150 laps remaining as Elliott held a nearly three-second lead over Kurt Busch.

Reed Sorenson tagged the wall in Turn 4 with 149 laps remaining to bring out a caution. Brad Keselowski received the free pass and returned to the lead lap.

Bowyer was the first off pit road and took over the lead when the race returned to green on Lap 359. He was followed by Elliott, Kurt Busch and Martin Truex Jr. Kyle Busch restarted 16th.

With 135 to go, Bowyer held a small advantage over Truex as Logano moved into third. Kyle Busch had moved up to eighth.

With 100 laps remaining in the race, Bowyer held a small advantage over Truex followed by Elliott and Kyle Busch.

On Lap 432, Kyle Busch got into the back of Truex while racing for the second position, which sent Truex hard into the inside wall. He then shot up the track and into J.J. Yeley. “That hurt,” Truex said over his team radio.

The damage to Truex’s No. 78 Toyota was extensive and he took it to the garage, ending another excellent shot at his first short track victory in the Cup Series.

After pit stops, Bowyer was the first off pit road and continued to lead on the restart on Lap 446. Jones lined up second, Johnson third and Kurt Busch fourth.

Kurt Busch quickly moved into the second position after the restart.

Keselowski spun off Turn 2 on Lap 472 to bring out another caution. A handful of drivers elected to pit under the caution but when the race returned to green with 23 laps left, Bowyer remained out front, followed by Kurt Busch, Johnson and Chris Buescher.

Kurt Busch got around Bowyer for the lead with 20 laps remaining.

With 19 to go, Kyle Busch spun and wrecked off Turn 3 bringing out another caution. A couple laps earlier, Busch had made contact with Buescher which damaged his left-rear tire.

On the restart with 13 laps to go, Kurt Busch led the way, followed by Bowyer, Denny Hamlin, Larson and Johnson.

Larson quickly moved into the second position as Bowyer spun his tires on the restart.