YOU’RE COMING OFF A STRONG FOURTH-PLACE FINISH AT CHARLOTTE; WERE YOU LOOKING FORWARD TO GETTING BACK ON THE TRACK THIS WEEKEND? “With a nice solid top-five run last week, we definitely wanted to get to the track as fast as we could, start at that same point and adjust from there. Each race track is a different challenge. Racing here at Kansas twice a year, there will be more opportunities to gather notes and to feel more comfortable at this race track. It’s definitely one of the most challenging because it’s probably the least-banked race track that we run on that’s a mile-and-a-half. Therefore, your mile-and-a-half packages that you run at Charlotte or Atlanta might not be the same as they would be here. So what do we adjust for? Definitely warmer conditions than what we’ve had when we race here in October. So, we have to continue to adjust. All the practice thrown into one day, it sometimes gets tough to digest. For race set-up or qualifying set-up, you sometimes just take the darts that you have and throw them at the dartboard, see if they stick.” 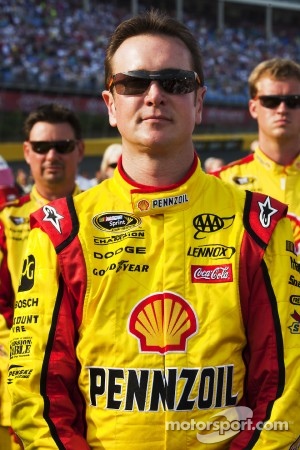 THE 400TH CAMPING WORLD TRUCK SERIES RACE WILL BE CONDUCTED HERE TOMORROW; TALK ABOUT HOW YOU’VE SEEN THE TRUCK SERIES DEVELOP OVER THE YEARS. “It’s been a genuinely great positive ride. Back in the early 90s, pick-up trucks surpassed vehicles as far as sales. Trucks were the big fad. We saw the Craftsman Truck Series develop into what it was and now see the Camping World Truck Series what it is today. Veteran drivers, young drivers, drivers that are still trying to prove themselves, crew guys in the farm system coming up through the truck series to work into a Nationwide ride or work up even into a Cup ride. You’ve got guys that have been in the series and made their name there like a Ron Hornaday Jr., Jack Sprague, and Rick Carelli. Then you’ve got guys like Travis Kvapil that are champions that have come to Cup and gone back. There are so many stories in the truck series. The year that I spent there was a genuinely good time of old-school racing. You show up at the race track, sometimes it’s a one-day show, sometimes it was a two-day show. All the crew guys are there. You all go out to dinner together; you’re all sleeping at the hotel. It’s just that comradery with the guys, that atmosphere of old-school racing. It’s fun. I did it based out of Detroit. We’d jump on Northwest Airlines and fly everywhere. It was a race to see who could leave the house the latest and still make the flight. It’s fun things like that that make the truck series what it is.”

THIS RACE IS THE HALFWAY POINT TO THE CHASE. YOU’RE SIXTH IN POINTS. AT THIS POINT, HOW WOULD YOU RATE THE SEASON SO FAR; ARE YOU COMFORTABLE AND SECURE AS FAR AS MAKING THE CHASE AT THIS POINT? WHERE DO YOU THINK YOU NEED TO IMPROVE OVER THE NEXT 13 RACES? “Being sixth is a good thing. That means we have a cushion behind us, but we still want more. We only have two top-five finishes. That’s where we need to be a better program, if we’re going to solidify ourselves running to the Chase and then running throughout the Chase, if we’re in it. It’s interesting with the point system. I think the numbers show last year’s system versus right now, the top 10 that are in it would be the guys in it if the point system was still the same. Every position is worth a point. It’s tough. You’re fighting every week for that one spot that you can gain. It could come down to a gallon of gas meaning the difference between a hero and zero. That’s where we’re finding ourselves. Everybody is pushing it to the limit – fuel, tires, strategy, chassis setup, shocks, you name it. That what makes it a good hard-fought battle going through these summer months.”

WHAT ARE YOUR THOUGHTS ABOUT THIS TRACK HOSTING TWO SPRINT CUP EVENTS? “We’ve got two stops here. You know, ISC is a great partner with NASCAR, it is NASCAR, and they’re going to dictate which race tracks we go to. This is a big market. It’s a great market for our series sponsor Sprint. Their involvement with our sport is what’s carried us to this level. Business transactions happen. Some race tracks deserve two dates. Some race tracks don’t. We’re here because it’s a deserving place.”

GREG BIFFLE TALKED ABOUT THE HEAT IN HIS CAR AT CHARLOTTE, WHERE THE COOL BOX WAS TURNING INTO A BLOW DRYER AND BURNING HIS FACE. WHAT IS THE WILDEST THING THAT’S HAPPENED TO YOU INSIDE A RACE CAR OTHER THAN AN ACCIDENT WHERE YOU FELT LIKE YOU COULD BE LOSING IT PHYSICALLY? “There’s hot air in my helmet every weekend. It’s a matter of maintaining pace. There’s malfunctions that happen in cool suits, cool boxes with the helmet, fans that blow on you. I grew up in the desert southwest, one of the hottest places to be a race car driver. That training has probably helped me over the years to get through some of the tough hot days. I’ve definitely had some struggles. At Sonoma one year, all the brake fans and everything that was throwing amperage out of the car didn’t leave the driver with any comfort tools. After the race, I cramped up. I couldn’t walk. I was really dehydrated. It took a while to come back too. It happened there. Watkins Glen is a tough place and then there’s Martinsville, that one challenges me each time I go there. When you have lack of speed and you’re working the body over and over lap after lap, that’s when it gets tough out there. Hey, you’ve got to muscle through it.”

But right now that isn’t an option.

FORD HAS WON SEVEN OF THE LAST 28 RACES; DOES FORD HAVE AN ADVANTAGE OVER THE COMPETITION RIGHT NOW? “They’re definitely the favorites going in. If you had a fantasy league, you’d start with those eight Fords or however many there are out there and fill in the blank elsewhere. Those guys have a competitive advantage under the hood and they’ve found something with their setup that Carl Edwards found the last two races, three races of last year. They’ve definitely got their homework done and polished up. They’re out there hungry right now to get those wins racked up in their win column.”

MOST TEAMS ARE FOUR-CAR TEAMS, PENSKE RACING ONLY HAS TWO CUP CARS. AREN’T YOU AT A DISADVANTAGE…NOT A LOT OF SUPPORT THERE? “I’m sure we’d love to have four teams. We have the ability and the infrastructure to do it. It’s tough to find the sponsorship. It’s a tough market. I’ve got AAA on the car this weekend. It’s great to have them as a team player at Penske Racing, but they only wanted to do a limited amount this year. If we could influence them to run a full season and be out there with a top-quality driver, we’d love to have that scenario. But right now that isn’t an option. Right now we’ve got Shell/Pennzoil as our primary and Miller Lite on Brad Keselowski’s car. Those two programs can carry two cars, but we’re trying to fill in the blanks elsewhere just like every other team is.”

Chase Elliott on Harvick contact: ‘I don’t care who he is’