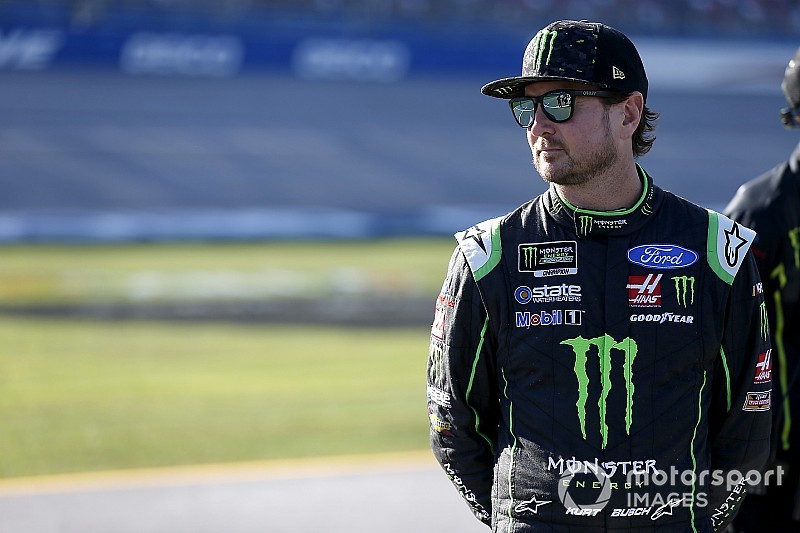 Kurt Busch, who was leading Talladega at the white flag, ended up 14th in the finishing order after running out of fuel.

Busch had led 108 of 188 laps before running out in the final corner of the race, handing the race win to Stewart-Haas Racing teammate Aric Almirola.

"Yeah I was trying to use all the information I could with my guys telling me about how the other teammates were lifting, what their fuel mileage looked like and then you don't want to conserve too much and draw the gap of our cars back to the other guys," he said.

But his frustration was less with the final result and more so with NASCAR's decision-making, criticizing two of their late-race calls.

"So I was trying to do what I could to manage the fuel and there was two missed calls by NASCAR there at the end," he continued. "Why (we had) an extra yellow flag (is) beyond me. The track was ready to go. And at the end you know, once we crossed the white flag, if there's a wreck and an ambulance needs to be dispatched. I've been on the other side of that where I was racing coming back to win the race and they said, well we had to dispatch an ambulance.

"There was two cars dead in the water down there, Chase Elliott's safety is of my concern, so is the No. 32 car (Matt DiBenedetto). And so, it's a human call. There's rules that need to be stricter at the end of these races but man, what a Monster Ford."

He then transitioned to praising the car he had, which allowed him and his three SHR teammates to completely control the majority of the race. "Led a lot of laps. I tried to stay positive and I said, you know there's going to be restarts at the end. We need to save fuel. I did everything I could in my power on my check list. I just gotta thank Doug Yates for the power to lead all these laps today.

"It's a really different Talladega for me and I really enjoyed leading the race and working with my teammates. And really happy that a Stewart-Haas car won, but the four of us, I've never seen so much synergy."

Regarding the calls, he then said once again, "There were two human elements at the end there. I don't know why we ran an extra lap under yellow and why there wasn't a yellow for the dispatch of an ambulance."

Despite the tough loss, Busch still heads to Kansas in a strong position points-wise, sitting sixth in the playoff standings and 30 points above the cut line.

"That's good stuff. We had 21 coming into this and if you can bank nine and get the heck out of Talladega, sounds good so I'm heading home."

NASCAR later responded to Kurt's criticism, releasing the following statement: “We were closely monitoring each car involved, and were actively communicating with spotters and safety trucks in turn 1. All cars were able to either roll off under their own power or signal they were clear. As always, we make every effort to end under green for our fans in the stands and at home, which we did."

Harvick: SHR's plan was "all about survive and advance"