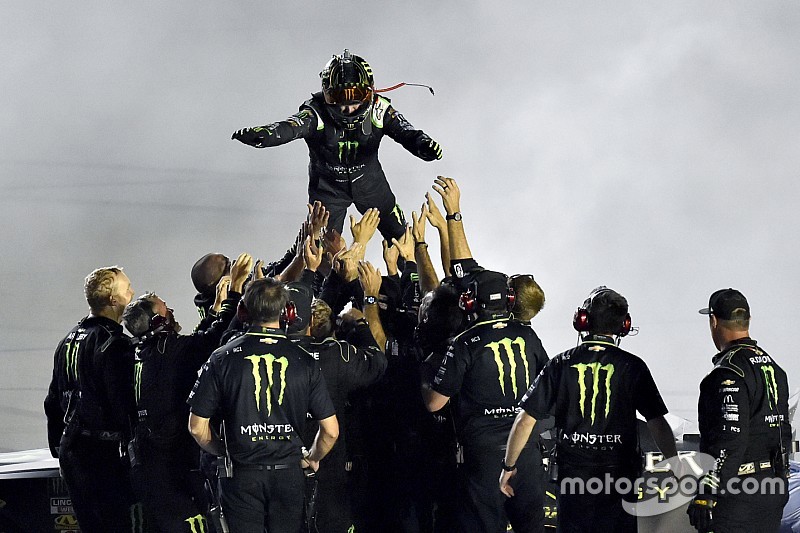 Kurt Busch is a winner again in the Monster Energy NASCAR Cup Series and suddenly a much larger prize possibly awaits on the horizon.

It’s been nearly 15 years since Busch won his only NASCAR Cup Series championship, taking the 2004 title in the first year NASCAR used a 10-race playoff format to determine the series champion.

Since then, he’s raced for five other organizations but the closest he’s come to winning a second title was the 2009 season when he finished fourth in the series standings driving for Roger Penske.

Now at 40 years old, Busch is older, wiser and not afraid to gamble on himself, such as his decision to leave Stewart-Haas Racing in the offseason for a one-year contract with Chip Ganassi Racing.

Just 19 races into his tenure with CHR’s No. 1 Chevrolet team, he is now locked into the playoffs thanks to fender-banging victory over younger brother Kyle Saturday night at Kentucky Speedway.

Suddenly, the discussions about a possible retirement are on hold and the focus has become on fighting for a championship this season with the thought of coming back in 2020 for more.

“Whether you're knocked down or whether it’s a lateral move or whether it was an upgrade, you can look at it in many different ways. When the contract was struggling at SHR to come together, I called Chip Ganassi, and it took 30 minutes, and it was done,” Busch said.

“To me that meant respect. It meant that I was wanted. And when you have that, that’s that extra desire to push and to make this group a winner. They’ve won races in the past. Kyle Larson is a tremendous talent.

“We’re going to get all that done as we move forward here in the second half of the year.”

Busch admitted retiring at season’s end from Cup competition has “crossed my mind for different reasons,” but the strength of his team in recent weeks, including the victory, fuel his passion for more.

“This whole group of people, it gives you that energy of, ‘Yeah, it’s fun, and let’s get our sponsors lined up and let’s do this.’ That’s what it tells me,” he said.

“Now that we’re winners, let’s grab another gear, though. Let’s try to get this thing where the second half is one of those phenomenal years.”