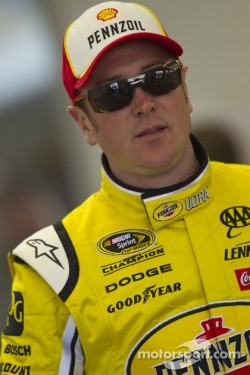 BRISTOL, Tenn. - Shell-Pennzoil Dodge driver Kurt Busch comes back to Bristol Motor Speedway looking for his sixth career NASCAR Sprint Cup victory in Sunday's Jeff Byrd 500 presented by Food City. Even a full year after losing last spring's battle in the waning laps on his self-professed "favorite track," he still lists that race as one of his career's biggest disappointments.

"We should have six wins at Bristol already and be coming back looking for our seventh win there," said Busch, who scored his third top-10 finish of the season in the tour's most recent race two weeks ago in Las Vegas to grab a share of the current points lead. "That was the big one that got away. What really stung so much was how we lost it. We had it in our grasp and it just got away.

In last March's race, Busch started on the outside pole and dominated, but was forced to settle with a third-place finish. His Steve Addington-led Penske Racing effort showed winning potential from the drop of the green flag. He was able to motor by pole-winner Joey Logano to lead the first lap of the race and went on to lead 10 times for the race-high 278 laps. Busch led stretches as long as 58 and 65 laps during the mid-section of the race, which was completed in its entirety but slowed by cautions three times for rain.

Busch had separated himself from second-place Jimmie Johnson and appeared to be headed toward his sixth career win on the high-banked half-mile before the 10th caution flag of the race was displayed on Lap 484 for debris. All the front-runners headed to pit road, with Busch and Johnson both taking four tires on the final stop. Greg Biffle, Matt Kenseth, Carl Edwards and Tony Stewart all took two tires, giving them the first four positions on the restart. Busch emerged from the pits in fifth, Johnson was sixth and the race resumed with 10 laps to go.

Instead of the fast work by Busch's crew paying dividends, it put the 2004 series champ at a disadvantage. Busch had to line up in the low lane (in fifth) while Johnson had the preferred high lane (in sixth) for the restart.

Busch hoped that he could maneuver Edwards, who lined up just in front of him, to slow the upper line of cars, but it didn't work out that way. Instead, Kenseth's difficulty getting up to speed stacked up traffic behind him, including Busch, who lost his opportunity to leapfrog his way to the front. Not Johnson, though. He weaved through the mess up to second, Stewart moved into the lead, and Johnson needed just one lap to pick him off, too. Busch finally cleared Biffle for the third spot with five laps remaining, but couldn't make up any additional ground during the final laps. At the checkered flag, it was Johnson taking the win by 0.894 seconds over Stewart. Busch finished third, with Biffle fourth and Kenseth fifth.

When Busch pulled down pit road after taking the checkered flag in the third finishing spot, he climbed from his car to confront a waiting throng of media members. He simply could not hold back the emotion of the moment. "I'd rather lose to any of the other (42) cars out there than the 48 car," said Busch, tipping his hat toward race-winner Johnson after he thought he was going to beat the Chad Knaus-led Hendrick Motorsports team in impressive fashion.

A year later, Busch can look back on that race day and put the outcome in proper perspective.

"What I said after the race wasn't anything personal against Jimmy, Chad or anyone on that 48 team," said Busch on Monday night as he looked back on last year's spring BMS race and planned for this weekend's return to BMS. "Jimmie is now a five-time series champion and the team has won a ‘gazillion' races it seems. That team has become the icon of success in our sport and we had them beat, but it just slipped right through our hands.

"Having cars as strong as ours was there last March is something you dream about," said Busch. "Not being able to capitalize on it and make it to Victory Lane was a real bitter pill to swallow. The guys on the inside lane were on two tires. The outside (lane) seemed to prevail all day long. That's where the 48 was able to restart. We beat him off pit road, but he still got the preferred lane. When luck shines your way, it shines your way. It was just a case of us having a great effort that day, but we just came up short and finished third.

"These things (races) are just so darned hard to win," said Busch. "You just don't know when the stars will align and you're able to put another winning effort together. Just ask a guy like Jeff Gordon how hard it is to win these Cup races. He survived a 66-race stretch in between wins and that's a long time. It (winless streaks) can weigh really hard on you to the point that there are doubters out there. If you let the pressure get to you, you could even start doubting yourself.

"We're heading back into Bristol with a ton of confidence that we can get our sixth career win there this weekend," said Busch. "We just hope that we can have a Shell-Pennzoil Dodge that's close to being as strong as our car was in this race last year. We'd love to have that kind of opportunity to win again at Bristol."