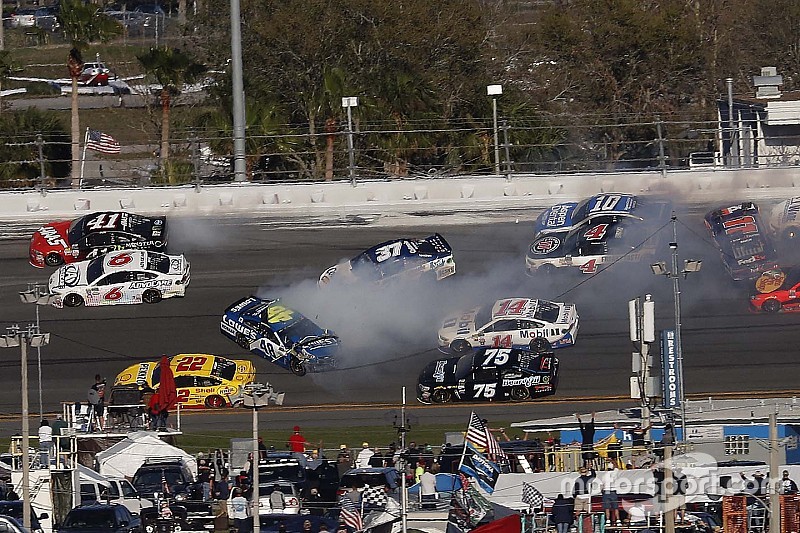 Tony Raines didn’t know what to expect when he was offered the spotter’s job for Kurt Busch at the end of last season.

Busch’s 2016 spotter, Rick Carelli, who also partnered with the driver during his stint at Furniture Row Racing in 2012, was headed back to the Denver-based race team to work with rookie Erik Jones.

Raines, who transitioned from the driver’s seat to the spotter stand over the last three years, says he was hesitant at first. But after a little research, Raines was up for the challenge.

“I knew it was going to require me to step up what game I had ,” Raines told motorsport.com. “I like a challenge. I like to win. I hate losing. I hate being passed on the highway, let alone on the race track.

“It’s going to be a learning curve. Obviously, we got off to a great start. We’ll have some bumps in the road, I’m sure Kurt will be chewing my tail out.”

Speedweeks didn’t get off to the best start. Busch wrecked in the Clash after 16 laps and finished last in the rain-delayed event. Raines was somewhat surprised when Busch remained calm after their first outing. Four days later, he finished third behind his Stewart-Haas Racing teammate Clint Bowyer in the Cam-Am Duels.

The real turning point for Raines relationship with Busch came later that day.

“Kurt called me over to the motor home and we watched the race,” Raines said. “We discussed it. I thought, going in there, it would be a one-way conversation. It was far from that. He’s as hard on himself as he is on the people that he wants to help him succeed. And I like that.

“If I make a mistake, I know it. If he calls it out, I’m OK with that. I’ll try to make it right. I sense that he treats himself the same way. He said, ‘This is the biggest race of the year. I feel we need to work on our communication as quick as we can.’ He said, ‘I don’t think we’re going to fix it all this weekend, but we’re going to work on it.’

“I like that. I felt that was a turning point, because I left there confident that I made the right decision. ”

Having a former driver as a spotter

Raines, 52, raced against Busch’s former spotter, Carelli, on the Southwest and Southeast tour “when the driver (Busch) was still in high school." They also competed in the Camping World Truck Series and the Xfinity tour. He feels coming from a similar background to Carelli's will help him acclimate to his new role.

Raines raced in the Cup series for 14 seasons, 12 against Busch. His understanding of the cars and the competition should also prove beneficial.

“I’ve raced against Kurt,” Raines said. “I know how good he is. I know how good he can be. He proved that Sunday. Not driving any more, it’s cool to be part of a winning organization and help someone that can still win races. It was a big, big race for him. Winning the Daytona 500 is big for anybody.

“This was a cool, cool week. It started out a little shaky, got better and better and ended as good as it could. I know by the end of the day I’ll be worrying about Atlanta already. This is crazy. It’s unreal. I know he wants to win more races and the big picture is the championship.”

Winning their first race — and qualifying for the playoffs — was a huge relief for Raines. But he wants to set the bar higher. To do that, Raines know he’ll have to have a better understanding what Busch needs from his spotter.

The old Kurt Busch might have flipped out when his rearview mirror malfunctioned in the closing laps of the Daytona 500.

With his first opportunity to sniff the possibility of winning NASCAR’s most prestigious race in nearly a decade, the driver of the No. 41 Haas Automation Ford remained focused on the prize — the Harley J. Earl trophy.

The driver, whose public persona is at times much different from the one family and friends see, did have a moment with his interior specialist Jay Guarneri following the victory — but it was all in fun.

Like many of the crewmen who have supported Busch during his 17 seasons in Cup, there’s no driver that Guarneri would rather work with in the NASCAR garage.

“Every driver should have the passion that Kurt Busch has,” Guarneri told motorsport.com. “When he drops the (window) net, you never have to ask whether he gave you everything. He wants to do it. He wants to win it all. It’s good to have a guy like that driving your car. You never have to kick him in the butt to make him go. Under the right circumstances, Kurt could have already won five or six championships like Jimmie Johnson by now.

“(Sunday), he showed the kind of driver that he really is. It’s a privilege to be part of this team.”

Guarneri has invested 22 years in NASCAR with the top teams: Hendrick Motorsport, Joe Gibbs Racing and Dale Earnhardt Inc., during its glory days. At SHR, he’s responsible for Busch’s creature comforts inside the race car for the last three seasons — including the rearview mirror. He says Busch joked that he cussed Guarneri for a lap-and-a-half after the mirror came loose. Then Busch realized the hose clamp was still secure around the roll bar and the mirror’s bracket had snapped in half.

Working with an elite athlete such as Busch, Guarneri has learned to take the good moments with the bad. However, he's experienced far more positives since Busch joined Stewart-Haas Racing.

“He’s not picky,” Guarneri says of the 2004 Cup champion. “He’s gets in the car. If he asks you to do something, you do it. He’s not high-maintenance by any means. You just give him what he wants.

“He’s the real deal. He’s a good guy. He just got married. He’s got a glow on his face. He’s got a pep in his step. It’s good to be Kurt Busch right now.”

At 38, Busch is one of a dying breed of old school racers still left in the sport. If he wanted to race, he had to work on his own cars, coming up through the feeder series in the Southwest. Guarneri believes that’s one of the reasons Busch fit in so well at SHR.

“Our whole team is racers,” Guarneri said. “Everyone at Stewart-Haas Racing is racers. Some of us have been with Gibson for 13-14 years. We’re old school. There’s a bunch of old school on our team. It’s very similar to the scenario Jimmy Fennig assembled at Roush. It’s the same thing with Gibson.

“But we all know what the deal is. We’re all adults. We’ve all been doing this a long time. And it’s a good relationship between Tony Gibson and Kurt Busch, because when one gets out of line, the other one will put the other one in line and vice versa. When you travel the way we do, 38 weeks a year, it’s a long season. Sunday was long. Sunday night was long. Monday morning (after the team celebration) was long (chuckles).”

Edwards back at the track, bringing his helmet and suit "just in case"