Kurt Busch comments on the difference between his NASCAR Cup car and the V8 Supercar that he took for a ride at the Circuit of the Americas in Austin, Texas.

(April 24, 2013) – NASCAR Sprint Cup driver Kurt Busch said he was on information overload as he was fulfilling a racing dream Tuesday, taking part in a car swap with an Australian V8 Supercar at the Circuit of The Americas in Austin, Texas.

The media event was to promote the May 17-19 V8 Supercars Series race at the Circuit of The Americas, which will also host the Formula 1 United States Grand Prix later in the year.

To prepare for the car swap and get orientated to the 20-turn, 3.45-mile circuit, Busch took a number of laps in his No. 78 Furniture Row Chevrolet SS.

It has speed, agility and breaking power.

“I had a blast driving my car on the road course and even more of a blast in the V8 Supercar,” said Busch, who joined the Denver, Colo.-based Furniture Row Racing in October. “The Circuit of The Americas is an awesome track with a lot of interesting and fun turns.”

While Busch was receiving a quick lesson on the 3100-pound V8 Supercar his Australian counterpart and Supercar driver James Courtney was getting prepped by the Furniture Row crew on the 3400-pound Sprint Cup car.

For starters, Busch had an easier go during the first step of the learning process. He only needed to open a door to get into the Supercar while Courtney had to enter the doorless Cup car by climbing through the window.

But Busch also had his moment of anxiety with the V8 Supercar steering wheel being on the right side and shifting the sequential gearbox with the left hand.

“I knew it was going to be a whole different feel to shift and drive from the right side, but I was really looking forward to it,” explained Busch.

Once the minimal amount of anxieties were put aside and the two champion drivers got the cars up to speed it was smooth sailing. They chased each other on the big track and also demonstrated showmanship by performing a synchronized pattern for the media as they rode side-by-side down the front straightaway.

When the two drivers exited the cars after an approximately 20-minute run, they couldn’t wait to tell each other the thrill of the ride and the differences of the two cars.

“The NASCAR car was massively impressive, a beast of a machine with a lot of power,” said Courtney, a Holden Commodore driver. “It was a unique experience for me to drive from the left side and shifting the H pattern. The car moved around a lot more than what I am used to.” 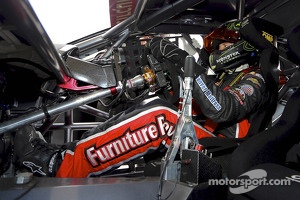 Busch was succinct in his description of a V8 Supercar. “It’s a muscle car but it’s a sports car at the same time. It has speed, agility and breaking power.”

Busch added, “It was sure a thrill to get into a car that I have watched and admired for many years during all those Supercar road races. It was also a little weird driving the Supercar and watching my (Furniture Row) car stretch its legs down the straightaway.”

Labonte looking to capitalize this weekend

Do we already know the 2018 NASCAR Cup Series champion?