Kurt Busch: "I was going to wreck my little brother to win today" 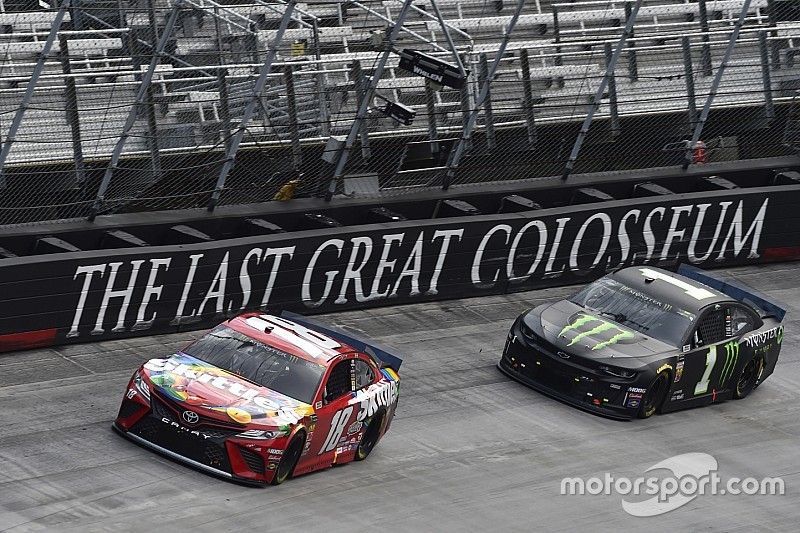 Kurt Busch didn’t mince words about what he would have done for a win Sunday at Bristol (Tenn.) Motor Speedway.

On a restart with 14 of 500 laps remaining in the Food City 500, Kurt lined up second to the leader and his younger brother, Kyle.

Kurt got very close to Kyle’s rear bumper before Kurt tagged the wall with three laps remaining, which slowed his momentum.

How far would have Kurt pushed the issue if he had the chance?

“That one is tough. I really wanted to beat him. I was going to wreck him,” Kurt said after the race. “I wanted to stay close enough so when we took the exit I was going to drive straight into (Turns) 3 and 4.

“He already won (this season). Figure he could give a little love to his brother. I wanted that one bad. I feel like him right now, I’m all mad because I didn’t win.”

Both Kyle and Kurt had several obstacles to overcome to get to the front at the end of Sunday’s race.

Kyle Busch was involved in a multi-car wreck on Lap 1 while Kurt had to fight his way back from the rear of the field after qualifying 27th.

Both Kyle and Kurt elected not to pit under the final caution of the race, so they moved up in the first and second positions, respectively, on the restart.

“This car, we were struggling on qualifying, we struggle on taking off. I just can’t get that right rear to grip until it gets heat in it,” said Kurt, who is now eighth in the series standings. “It’s hard to be patient when you’re running for the win on old tires.

“I’m happy that we were in position to do it. This group of guys, we’re not quite ready to win yet, but that was close. I was going to wreck my little brother to win today. With three laps to go, stepped out in Turn 1, and I wasn’t close enough after that.

“But thanks to (crew chief) Matt McCall and everybody at Ganassi.  This No. 1 Monster Energy Chevy is fast.”

And what was Kyle Busch’s response in Victory Lane when told of his brother’s desire to have wrecked him for the win?

“He has to catch me first,” Kyle replied.

Kyle Busch rebounds from early wreck to win at Bristol